Occasionally I have to weigh up the morals and after-effects of my opinions. Should I be honest about the experiences I have had if it could affect those who genuinely don’t deserve it? I have never used my feeble opinion to be deliberately rude, though I have always taken the stance that there is a lot of places to blow £10-15 on a main course without having to eat out badly. Paying customers have automatically earned the right to know when somewhere is not good enough.

Sadly, none of this excuses mediocre food, which was served in abundance on a recent Sunday afternoon. The turkey roast was a reminder of a poorly executed Christmas dinner. The meat, generous in portion though cooked to an unappetising dry texture, came with equally overcooked root veg. The Yorkshire pudding, impressive in stature, was like eating stale cotton wool and gave the impression it had been cooked some time ago and set aside. The gravy tasted remarkably like Bisto granules, which is a compliment of sorts, given that nothing else on the plate was recognisable in flavour. I would love to go into detail about the roast beef dinner, but there is no point as it was the same overcooked dross, albeit with a different overcooked protein.

More animal abuse was present in the chicken burger. Yes, you guessed it, overcooked again. The ciabatta bun was far from fresh and the tikka seasoning on the meat had a claggy, shop brought paste feel. At least the chips were good. 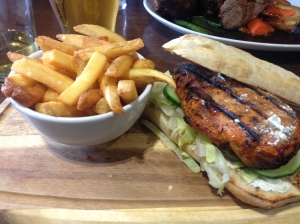 Desserts mercifully saved face. Both the cheesecake and Bakewell tart were capably made, with the tarts pastry particularly delicate. Each were a considerable step up from anything previously served in taste and the way it looked on the plate. 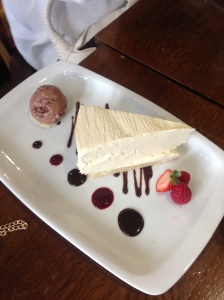 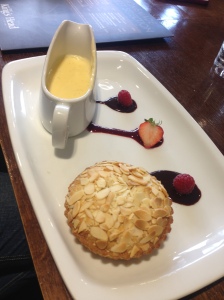 Before meeting up with friends for this lunch, I sat alone at the bar with a pint of ale and a bowl of nuts chatting to a very helpful bar maid about the beers on tap. It was during this time that I had the chance to fully take in this big old pub at the end of the high street. There were others here enjoying a quiet Sunday pint in a pleasant location and, if nothing more, The Kings Head serves its patrons very well in this sense. These people also deserve to have somewhere to eat well and this is where the pub falls drastically short. Maybe one day, hey.