The previous incarnation of The Horseshoe was a local for my family. Probably twice a week my brother and I would go with my parents there for a 2-4-1 meal that would do little for the development of my taste buds. Dad would his work way through a huge portion of mixed grill, whilst Mom would order the same and pick at the chips for forty minutes before sneaking all of the meat into a tissue for our pet dog at home. My brother and I, now into our late teens, made the most of the fact that Dad was picking up the bill. For it was these afternoons that we developed a taste for beer in epic proportions that still haunts me now. I never cared much the gammon steaks full of sinew, the chicken devoid of any moisture, or the curries whipped straight out of the microwave.

The curries at The Horseshoe have thankfully moved on from those days. Since they change ownerships they have featured in the British Curry Awards finals for the last three years, thanks to their Chilli & Spice menu, which was a good enough reason for me to go. I do love a curry. Inside the large pub things had changed from how I remembered. The bar was still there, though the stains had been polished out and lacquered to a mirrored shine. The bar area has soft furnishings and the look of somewhere I could easily enjoy a pint of Cobra after work. The restaurant, segregated by glass, is all wood, leather, and white walls. We sit down and quickly order poppadoms, which are not the freshest I had, though are still a cut above your local balti house. 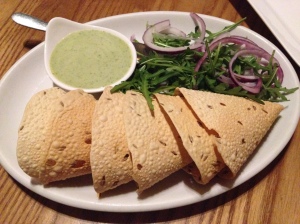 Starters suggest a serious operation: Lamb chops have a dark char and crust from the time spent inside a seriously hot tandoor. Inside the meat is pink with the flavour of the animal matched with a spicing that elevates it way above the norm.  They are delicious to point that I consider ordering more.  Paneer tikka had cubes of the size of children’s building blocks, also given the tandoor treatment.  The spicing again was spot on, with each of the blend distinct and traceable against the blandness of the paneer, which is similar to cottage cheese.  Baked chunks of pepper and onion provided the textural difference that was needed.

After all this I was expecting the curries to be some kind of revelation, an expectation that would fall well short. A fish curry leant heavily on coconut – a combination I am familiar with from my travels in Goa.  The sauce was muted to allow the fish to be present, which would have been fine had the fillet not been overcooked to a mush.  We nearly sent it back.  In hindsight, perhaps we should have.  A feisty Kadhai with good quality chicken was more successful, the chilli flavour bullish though mitred by clumpy chunks of onion.  Rice with flecks of crispy onions and spiced with cumin were a revelation, less so were the parantha which bordered on greasy.

We could have stayed for gulab jamun or kulfi but the work here was already done.  With polished service and obvious skill in the kitchen The Horseshoe is aiming well above others in the neighbourhood, with a raised price tag to suit.  Just don’t, as we did, believe the accolades and expect it to be one of the best in the country