Today I find myself north of Birmingham in Lichfield – a phrase I haven’t been able to say too often in the past. I am here for the holy grail of good company, good beer and good food. It is the food which I find most intriguing; I have come on the lure of a family run Italian restaurant where good pizza can be had. I have often bemoaned the state of Italian found in Birmingham – it’s the most poorly represented cuisine in the city and I am yet to eat in any in my home town that I would recommend to others. In Birmingham if you want good pizza you go to The Plough in Harborne. If home made, silky pasta is your thing, then I am sorry to have to break this to you, but you are in the wrong city. 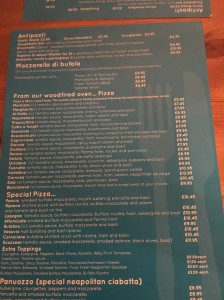 Pizzeria Margheri doesn’t look much at first. It’s a small room, with tired beige tiles on the floor and exposed brick walls. There are too many wooden tables for the cramped space and I imagine at full capacity the conversations of nearby diners become very much your business.  It is a good thing that they take the food so seriously:  They import as much as possible from their native Italy, from buffalo mozzarella through to hunks of cured meat which is sliced onsite.  Its an expense that pays off; the mozzarella is young enough to still threaten your chin with its milk, whilst the proscuitto has a depth of flavour and glistening fat that we rarely find on these shores.  With no cooking required the plate is an exercise in ingredient sourcing.  They pass the test with aplomb.

The aforementioned pizza is made with a sour dough base which we try in a couple of forms.  First up is dough balls which are world away from the spongy tripe that they serve at Pizza Express.  Here the dough is deep fried and non-uniform in size.  There is a pleasingly high salt content and a chunky tomato salsa which pays thanks to the quality shopping again.  Think savoury donuts for grown ups and you’re just about there.  The pizza was a delight.  Everything above board was well sourced, from more of the mozzarella to the discs of salami, but it was below decks where the hard work was done.  The dough had been treated to a blitz through an oven which rendered leopard spots of char on the base.  The crust was chewy, the centre correctly soupy.  It is up there with a certain Franca Manca in London as the best pizza in the country.  And all of this on a side street in a city that only qualifies as one because of a cathedral.  The thirty thousand residents of Lichfield don’t know how lucky they are.

Did I mention that they have a constantly changing pasta menu which I’ll be going back to try?  Or that it is seriously cheap? Throw in a starter, main course and a few beers apiece and you’ll struggle to reach the dizzying heights of twenty-five quid a head.  All of which makes the fact that we dined in a half empty restaurant on a Saturday evening all the more shocking.  Maybe they need a fully-functioning website, or maybe they just need to relocate to my street so I can single-handily keep them ticking over.  In a country full of chains serving faux-Italian, independents such as Margheri deserve to thrive for serving authentic food at a fair price.   At last I have an Italian which I can recommend.  Go try it for yourself, even if like me it is forty minutes on a train away.