My Dad was born in Aston and he is very keen for you to know that. I think he mentioned it about about a dozen times during a two hour lunch at Opheem recently. He says it to part justify and part bemuse himself at being in such a lavish dining room; his blue floral shirt showing a hint of silver chest hair to match his grey suit jacket, the ornate lights that sit central to the dining room reflecting off his tanned bold bonce. For a sixty-six year old widowed pensioner he’s owning it on his first outing to a restaurant that very much sits in the fine dining catergory. He generally doesn’t do this kind of thing; old Dave Carlo’s experience of Michelin stops and starts with a yearly M.O.T on his car. He is an obstinate creature of habit. Same pub every Friday. Same shop with those increasingly loud shirts. Same curry house with the same dishes everytime. Change doesn’t come easy at this age. But this year I’m committed to showing him the better side of things; he deserves it. Dad is both my biggest fan and biggest critic, he is the first to pick up the phone and tell me when I’ve not treated someone with the respect they deserve; the first to congratulate me when I’ve done well (unless it involves beating him). In the increasing parody that is my life he is my biggest constant and I bloody adore him for it. No matter how many I times I fall it is Dad that picks me up, dusts me off, and pushes me back to reality.

Opheem was in my mind the perfect fit for him: Aktar’s cooking has always for me been about family and generosity. Be it the portion sizes, the unstuffy service, or the nod to his own mother’s cooking, his food is egoless; designed with the diner’s pleasure in mind and never his own. I loved Opheem first time around – it is in my eyes the best opening of the year – and I was keen to say how the kitchen is progressing. Plus we have the added bonus of a new lunch menu which is absurd value at £22 for three courses. If Dad hates it then at least it is not going to be an expensive mistake. He doesn’t, of course. He bloody loves every second of it.

First the difficult bit. Try telling a pensioner whose Indian cuisine point of reference is Moghul in Acocks Green that a sperefied ball of tamarind and chilli water is going to be nice and watch his face. He eventually goes with it and is rewarded by the explosion of flavour that lingers long after the liquid dissipates. It’s properly clever stuff. He loves the pani puri that is layer upon layer of texture and spice, and even tries squid ink cracker with smoked cods roe and garlic. He quickly realises that the gulf between here and what he is used to is a huge one. The sweet potato bread appears with the lamb patè. I wait until he swipes the last of it the bowl before telling him those creamy jewels are brain.

I have mutton kebabs which are pucks of ovine and spice so smooth it is almost patè once you’ve broken through the delicately fried coating. The accompaniments of chopped tomato salad and yogurt mixed with mint are wry nods to the humble curry house. Dad had a dish derived from one of my very favourite things I’ve eaten this year. The ham hock samosa, once an element on the pork vindaloo main, is here the star. It has the same carrots roasted in anise, the carrot puree and the vindaloo puree. It is a beautiful piece of cooking that leaves Dad still talking about it one week after eating it when we meet again for beer and pool. Great food does that; it stays forever in the mind, outliving the eating and slowly morphing into a different beast that becomes a reference point that similar dishes will forever be judged by. I’m lucky to be there when my poppa is having that very moment.

Following an intermediary course of tamarind sorbet with sev and cucumber, we both have chicken for main. Thigh meat in a marinade pungent with herb, in a tomato and fenugreek sauce reminiscent of a certain chicken tikka masala. The chicken on both plates goes in record time, and I unashamedly ask for a jug of that sauce to put the rice and naan bread to use. Stained fingers and beard, the old man calls me classless. I hate to break it to him but I’m not the one wearing a brown belt with black shoes. Dessert is a pretty spiced custard with rhubarb ice cream and a fine dice of the barely sweetened fruit. It’s the only time Dad isn’t blown away. I eat both gladly. 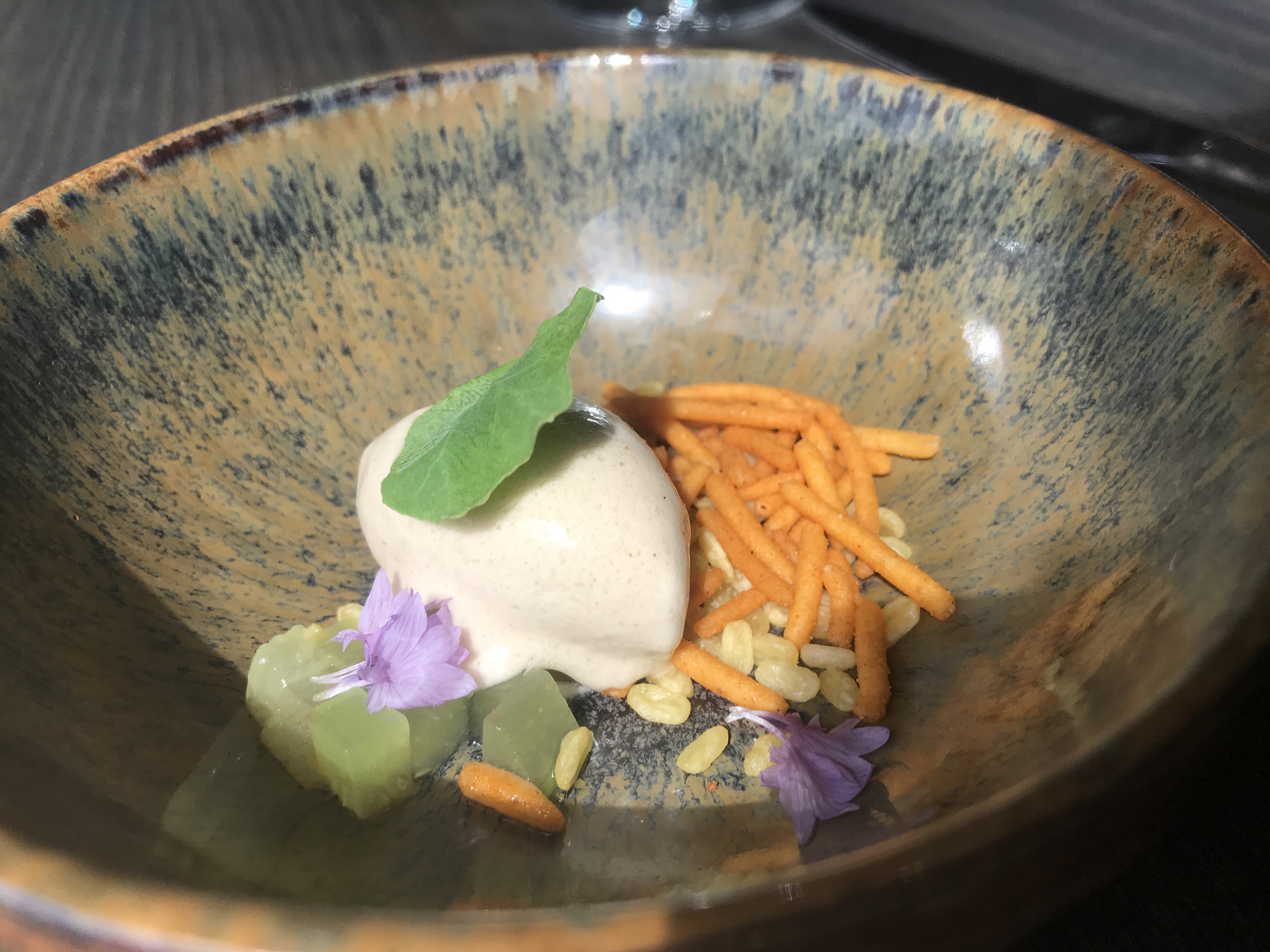 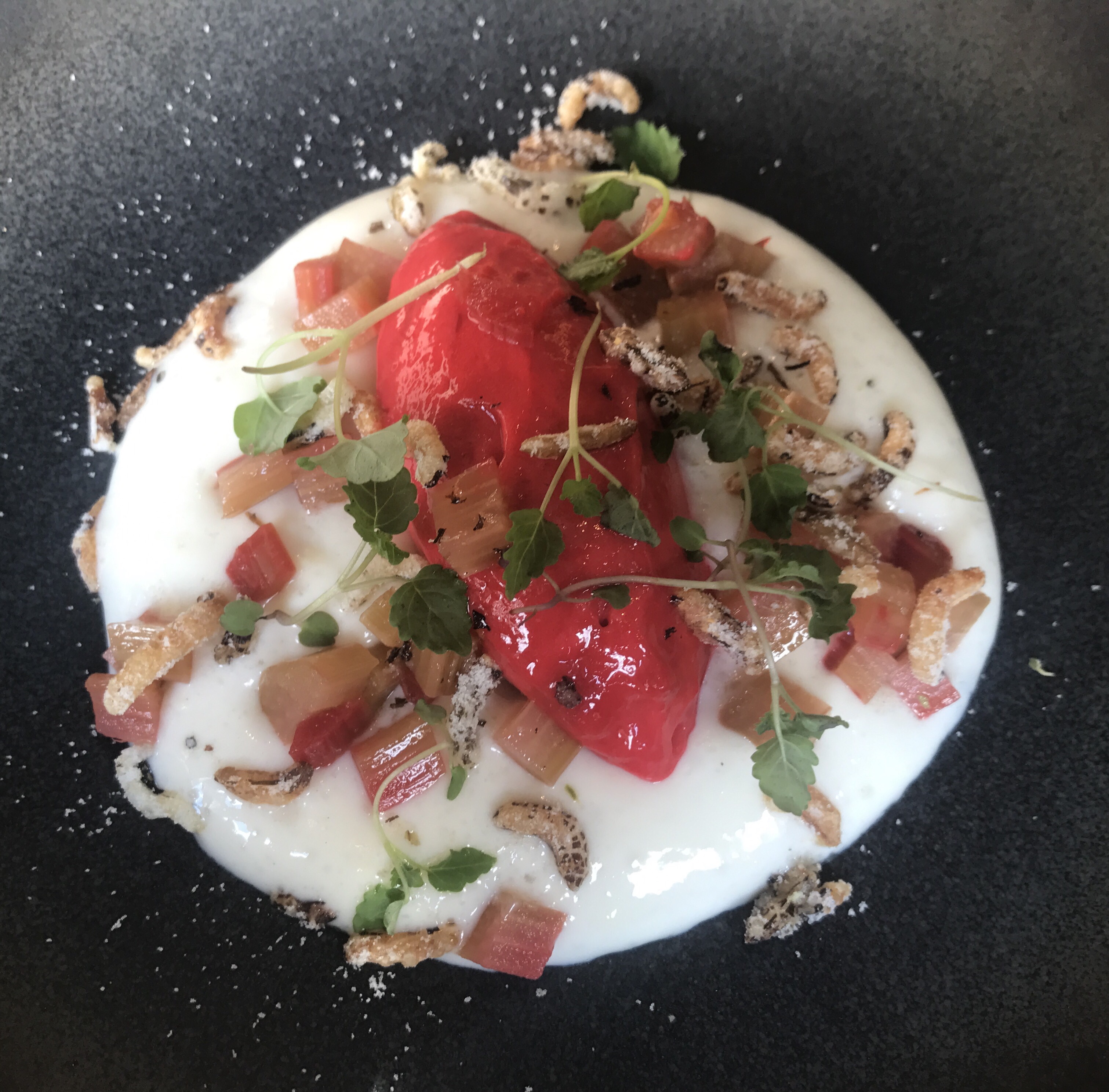 There is an unfair association with lunch menus that the cheaper price means less effort. Whilst that is too often the case, it couldn’t be further from the truth at Opheem. Twenty two pound buys you nibbles, bread, four courses with sundries, and a view of one of Birminghams most talented chefs working tirelessly in his shiny new kitchen. The biggest compliment is given by my dining companion, who comfortably states that if my mother were alive she would want to eat here every night. Proof that Opheem isn’t just for those well versed in these type of surroundings, but for everyone. Even the old cantankerous bastard born in Aston.