Kickstarter as a business model is very effective. It cuts out the banks and those pesky interest rates. It is free and ultra effective PR. Somewhat more importantly, and often overlooked, it allows the prospective restauranteur to gauge how welcome you are. Nothing quite says ‘open me’ like a city full of people willing to pay in advance for their dinner. Make this vast amount of money in a short period of time and you not only have a shiny new restauarant, but one that has the interest of the country, begging to know what the secret to success is. Step forward Gary Usher; belligerent, shouty, sweary chef patron of the Elite Bistro group. I’ve been to a few of these now, so I can tell you that the key to success is twofold: first make the kind of neighbourhood restaurant that has menus where choice is impossible at a price that most people can afford. Secondly, make as much noise as possible online. Slag TripAdvisor and those who post on it, call someone a cunt, maybe even turn up at a butchers for a scrap and post pictures about it on Twitter. This approach works, that much is obvious. 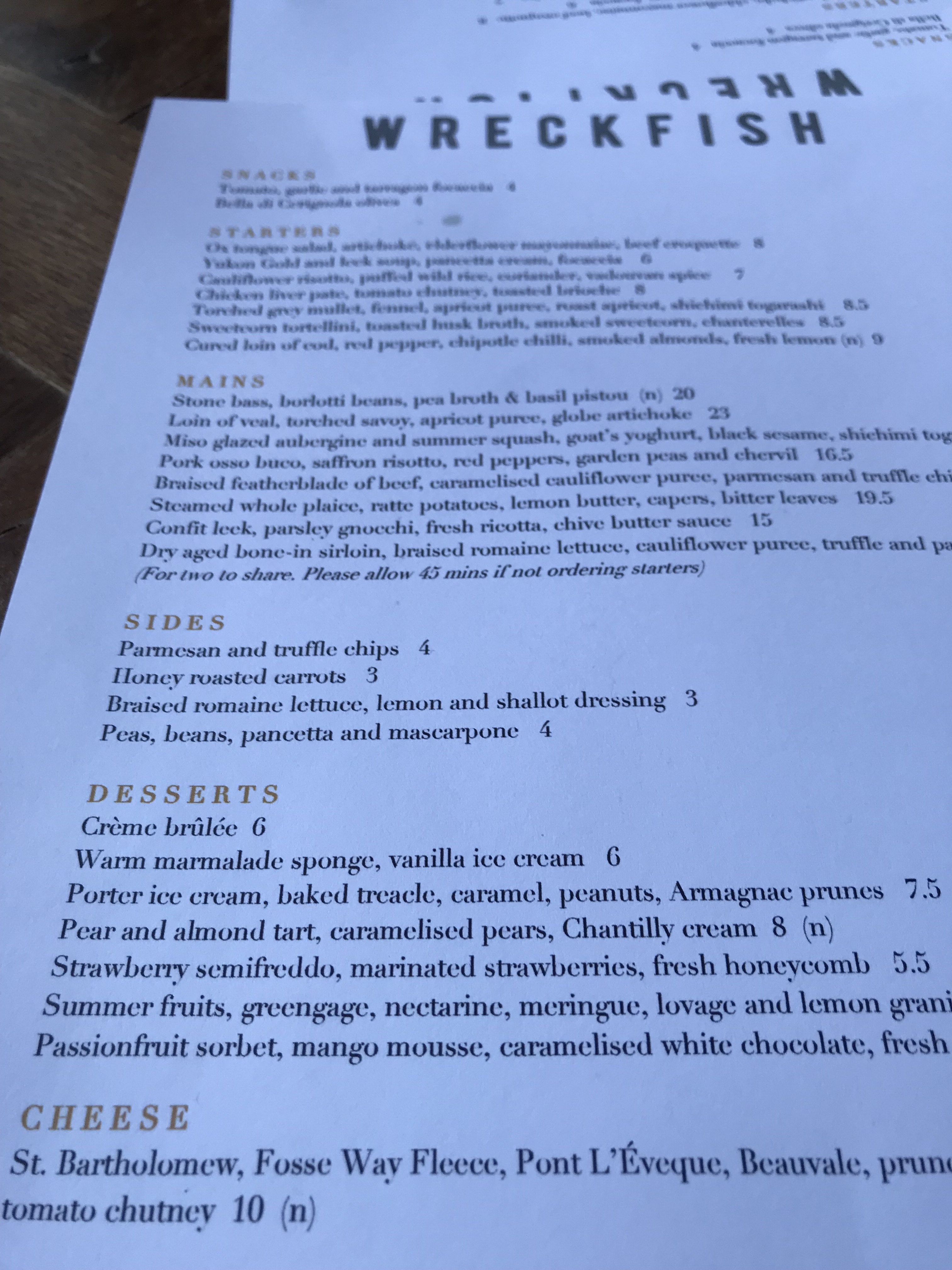 Wreckfish started as a Kickstarter project, I know because the very pretty lady opposite who dined opposite me backed it to the tune of a ton. We’d kind of forgotten about the dinner for two it entitled her to until it was nearly too late, making a last minute booking at the pretty building on Seel Street, and jumping aboard a train filled with football fans intent on spoiling my morning G&T. Inside the restaurant the space is arguably the prettiest of the group; the large open kitchen to the left of the door a nice touch, the shades of grey and petrol blue smart and modern. 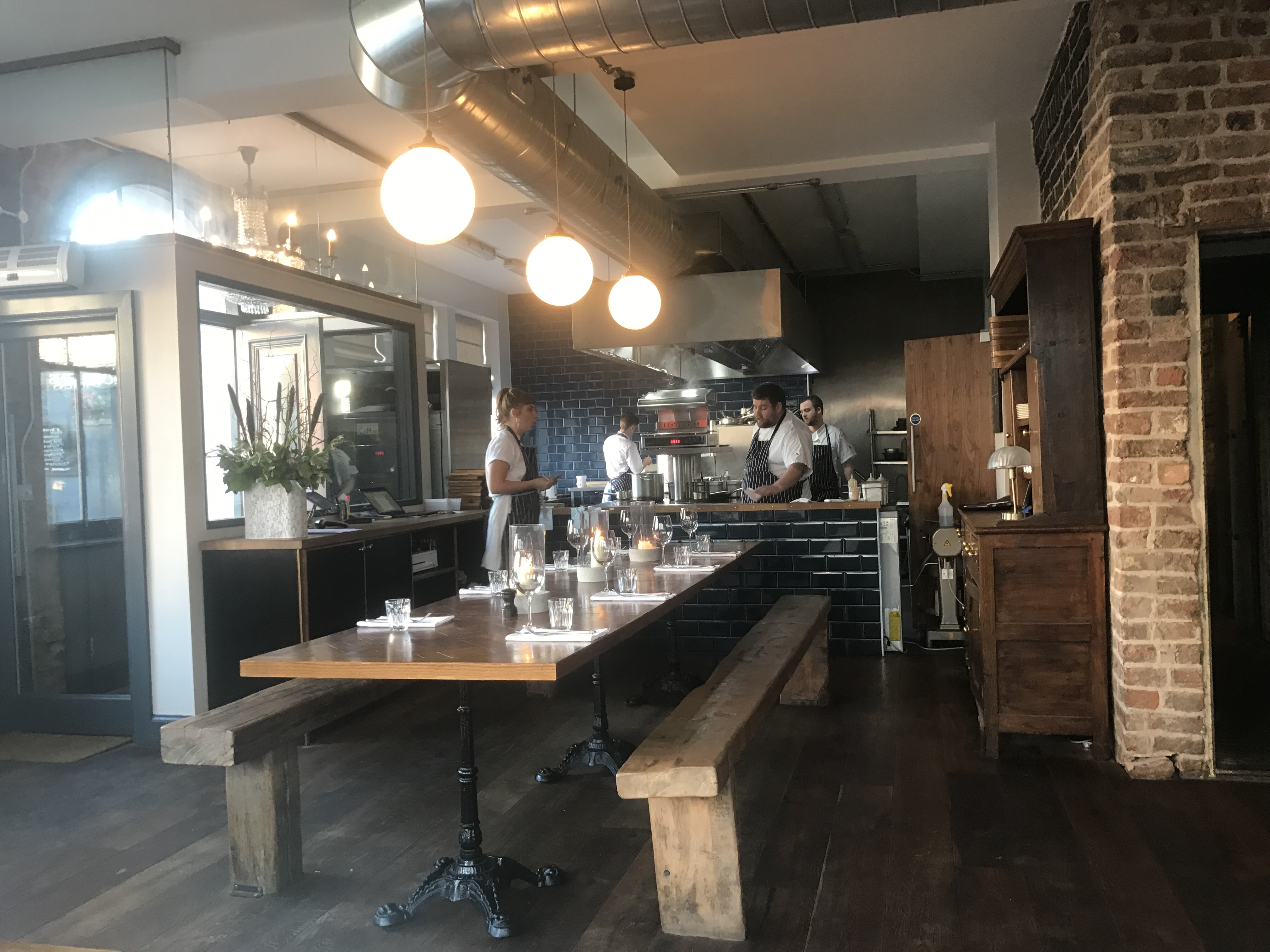 Having been a fanboy of Ushers (Gary; not the singer) food for some time, the menu is familar to me. We intentially stay clear of his classics; the parfait, or the slowly braised beef shiny with a heavily reduced sauce, and look to the bits of the menu that are new to us. We order a very fairly priced red and set to work. The foccacia is springy and delicious, though not as rich with olive oil as I recall. I save a couple of pieces for the starter of potato and leek soup that is thin and short on seasoning, though comes together a little more once the pancetta cream starts to merge with it. The other starter of cauliflower risotto is by now a famaliar trick, blitz cauliflower until they look like grains and cook in stock. The nuggets of the same veg cooked in vadouvan spice are lovely, as is the clever addition of puffed rice. It’s the highlight of the meal. 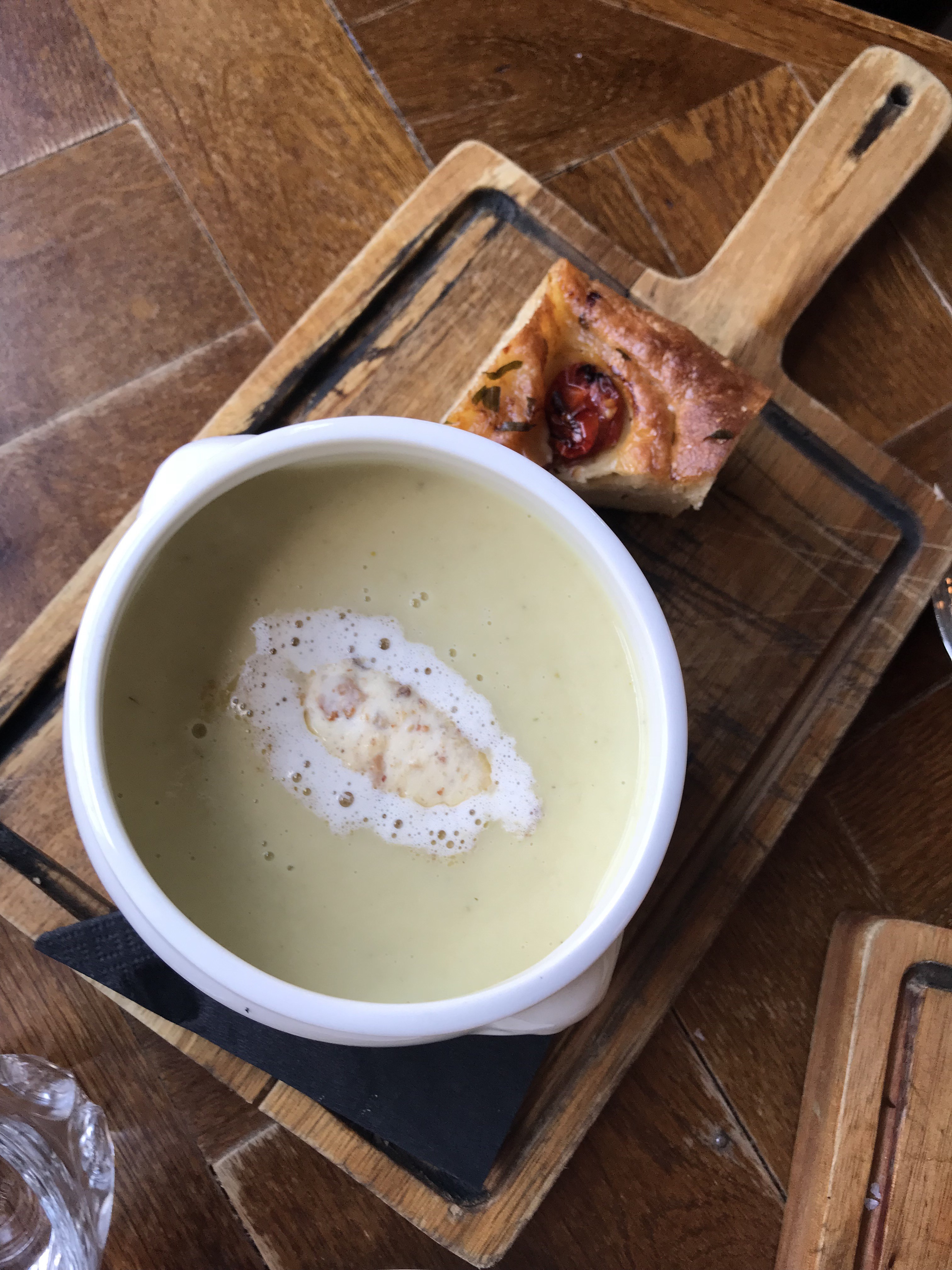 Mains mostly fail to deliver. A nicely cooked piece of stonebass is ruined by a basil flavoured broth that contains solid borlotti beans and more inept seasoning. And I’m sorry for the constant whining about salt, but with only pepper mills on the table there isnt much I can do about it. And it’s not like those awful Ducasse brasseries that intentionally keep it light; I’ve eaten the group’s food before, I know how bold it can be. A hulk of pork is just too generous in size, atop of a saffron risotto that has too much lemon juice so that it clashes with the slow cooked pig. That pork is lovely around the outer where the meat has caramelised, less so as you approach the bone. We have the parmesan and truffle chips purely out of greed that lack crunch. 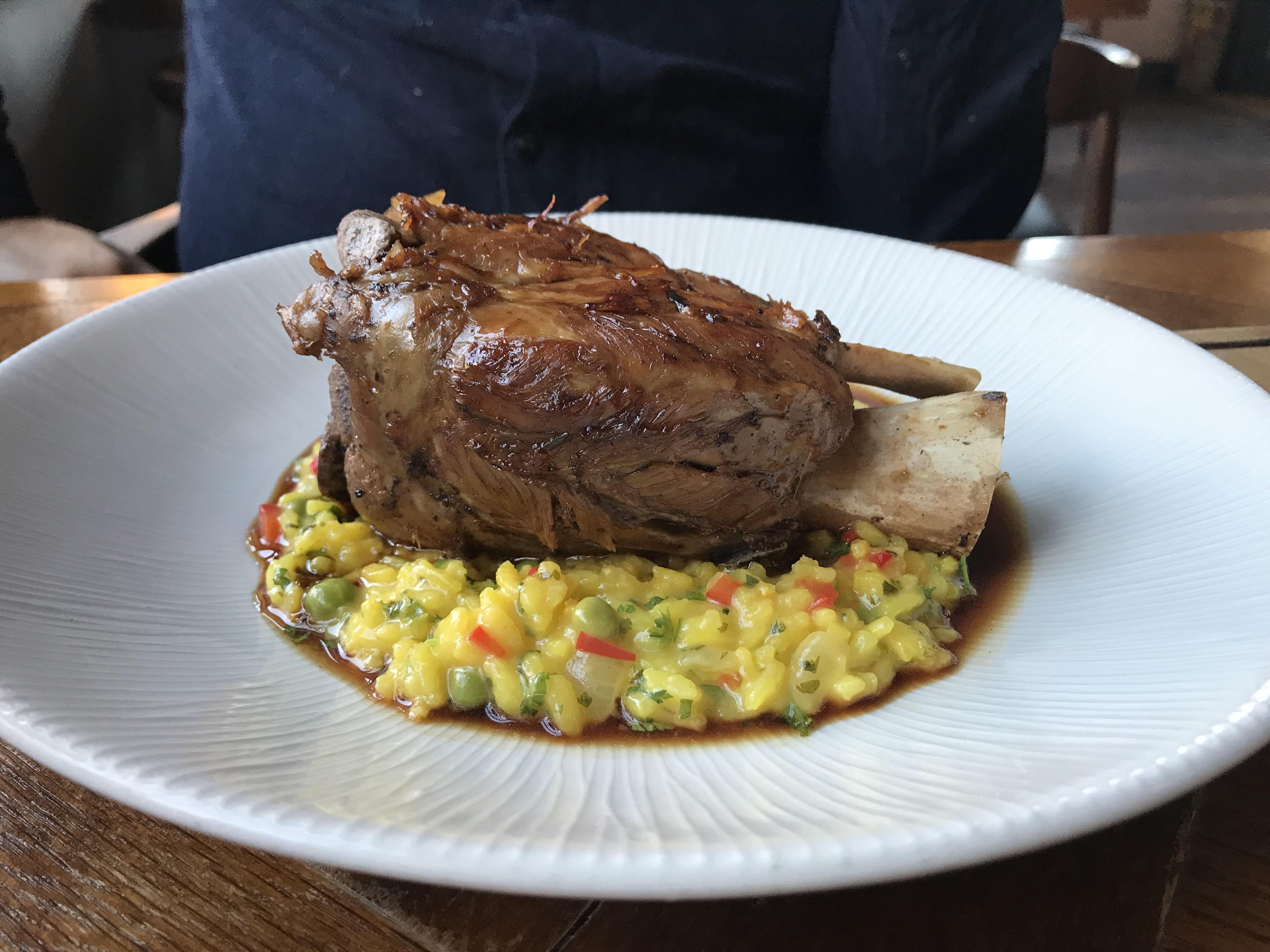 Dessert raises the game, though not without its imperfections for all to see. Claire loves her pear and almond tart, but I cant get past the fact that the pastry has cracked and is effectively served as two pieces. Maybe I’m being silly, but in my mind it shows an arrogance to serve something that clearly isn’t as it is intended. The other dessert has Guinness ice cream, baked treacle, prunes, and peanuts. It’s very well balanced; heady and adult. Almost a grown up sticky toffee pudding. 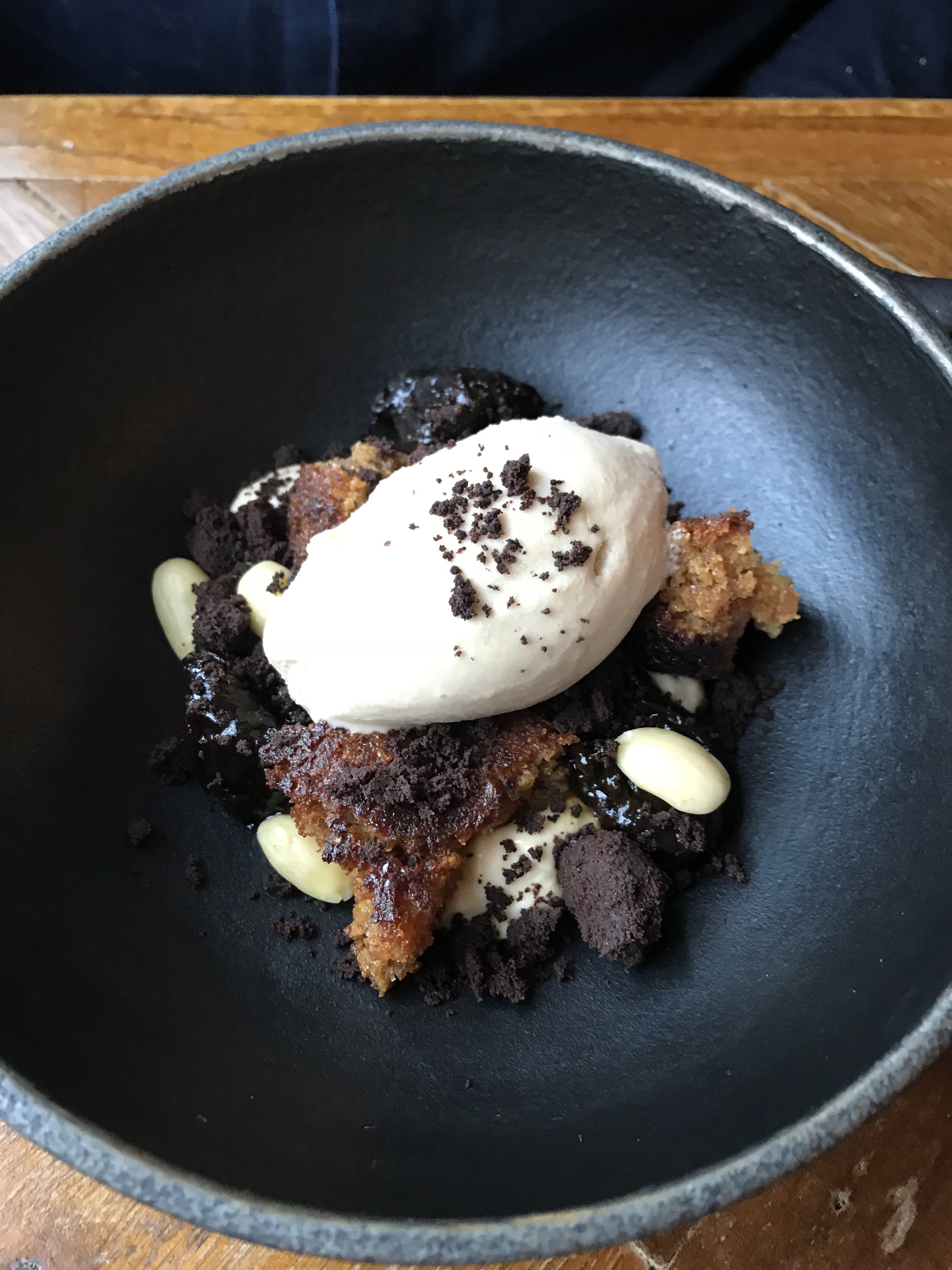 Service was slick, and we are in and out in an hour. The bill, with that pre-paid dinner voucher and a chargeable bottle of wine, is just over £130, though you could shave 20% off that by going a la carte and not backing them on Kickstarter. This was a meal hard to love, the worst I have personally had from a group continuing to expand at a rapid rate. Not that they need our money, but we won’t be backing them anymore. After a train journey especially to eat here, I’ve completely lost interest.