This little blog of mine brings out different reactions in restaurants. Some are totally ambivalent to me being present in the dining room, others noticeably different when I start taking pictures and notes. Some don’t want me there at all. I’ve had chefs tweet me from the kitchen to tell me to eat my food before it goes cold, or be annoyed with me because I took the liberty of booking under a different name. Recently I received a phone call from a chef who told me to cancel the reservation I had with the restaurant he worked at because the new menu was, in his words, ‘shite’. Food blogs are a funny thing. Chefs often dismiss us as the underbelly of gastronomic society, but they clearly care way more than they let on. It’s one of the reasons I enjoy drinking with them so much: you’ll get no annoying over-excitement or smoke-blowing bullshit out of a chef; cooking all day for fake dietary requirements has beat that out of them. 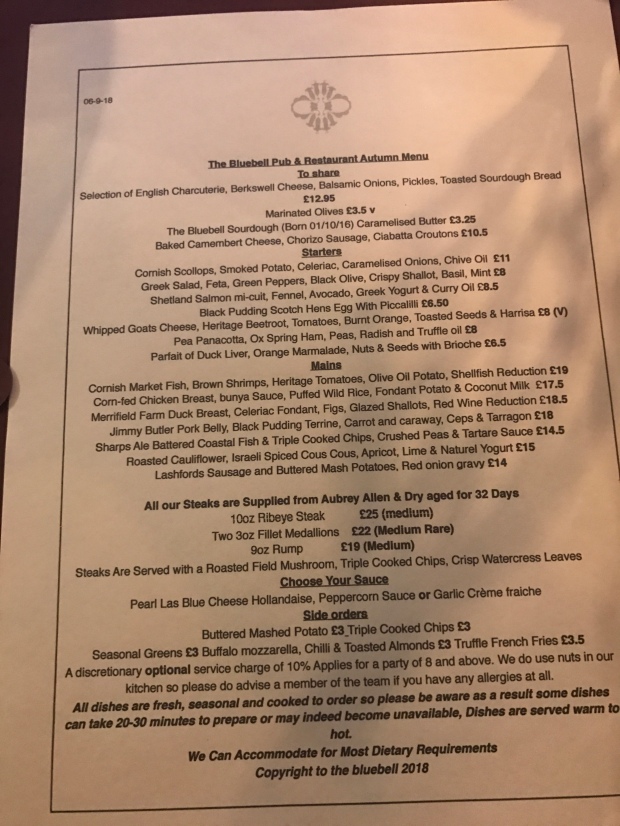 I guess that a lot of this reaction stems from a fear (and dislike) of some untrained gobshite daring to criticise their craft and vision. I get that; I can’t handle people judging my Monopoly purchases, let alone my livelihood. But sometimes a rarity occurs. A chef will actively ask me to eat his food, to sling that massive nutsack over his (or her) shoulder and cook without fear of my opinion. Joe Adams did that and I respect him massively for it. I saw him at some awards which I can’t remember the name of and he asked when I was coming to eat at The Bluebell. I said soon and returned to polishing my award. Fast forward a year later when I’m sat in said pub having a glass of wine and he comes out of the kitchen to ask why I still haven’t been. He doesn’t want to give me a free meal; he just wants to show how good he is. It would take a further eight months and another polite ear bashing to finally get there. The man is persistent amongst other things. 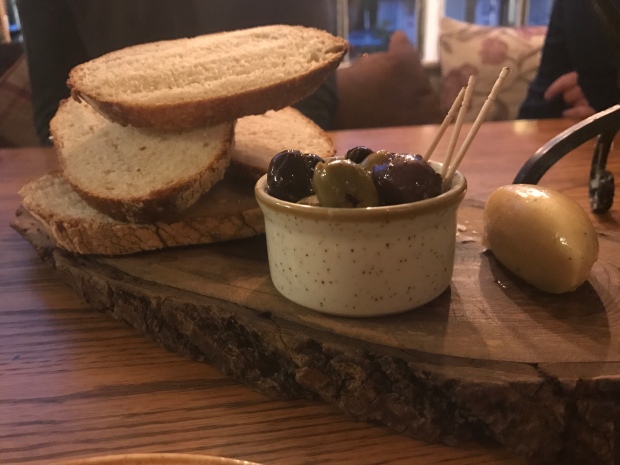 It turns out that Joe has the ability to back up the confidence. From the beautifully quaint pub of low beams and lower lighting (apologies about the pictures), he delivered one of the most enjoyable evenings I’ve had in a while, turning out smart food that gently coaxes reaction without stepping outside it’s boundaries. The dishes tend to riff on a couple of flavour profiles at a time; nuanced yet homely. All technically competent and boldly seasoned. Fat scallops with a seared hat from brown butter could easily have been lost within the umami rich smoked potato puree and caramelised onions, had batons of fresh apple and a spritely chive oil lifted it all. Same with the chicken liver parfait under a drift of nuts and seeds. It needs the orange marmalade as a counterpoint. Both are impeccably balanced. 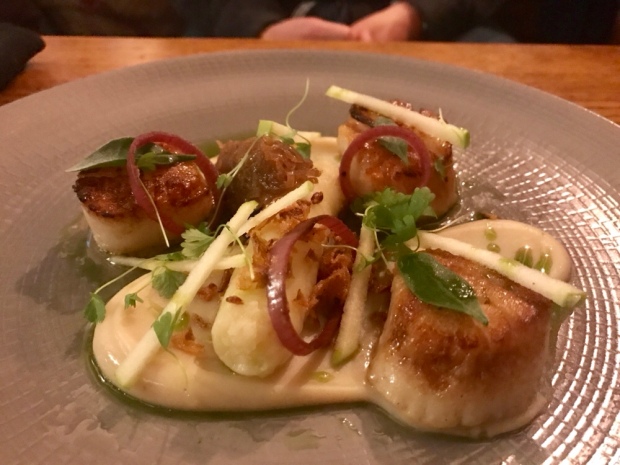 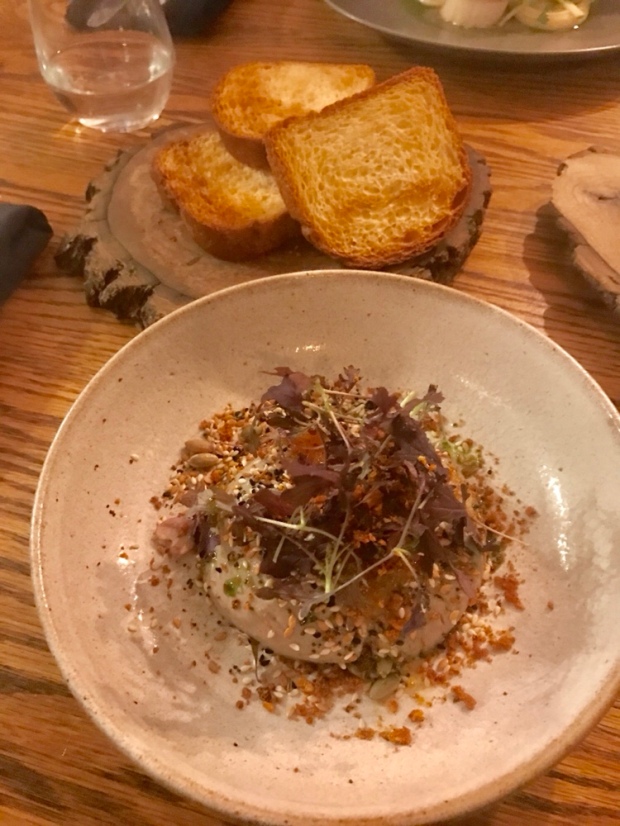 A chicken main has the breast cooked expertly to a crisp skin whilst avoiding drying out the meat. A fondant potato sits to one side with the less than conventional additions of puffed rice, coconut milk and a big tomato sauce spiced with loads of garlic, fenugreek, and chilli. From what, on the face of it, is a simple dish has complexities throughout; it may be rooted in Henley but its heart is in India. A hake dish takes top billing for the evening, with the puddle of shellfish bisque the highlight. It’s restrained in its approach, concise with every element warranting its place on the plate. It shows an egoless approach to the cooking, one where everything makes sense. We have desserts, though the wine was flowing a little too freely and I forgot to take pictures. There was a cheesecake and semifreddo from memory, nothing desconstructed and everything working properly. They are sweet, as desserts should be but seldom are anymore. The plates go back to the kitchen cleaned. 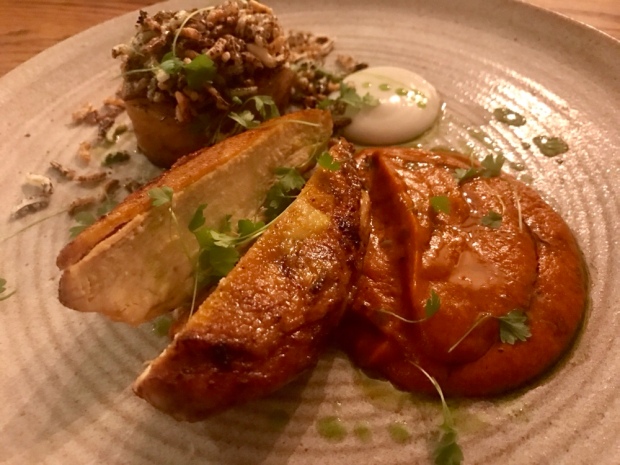 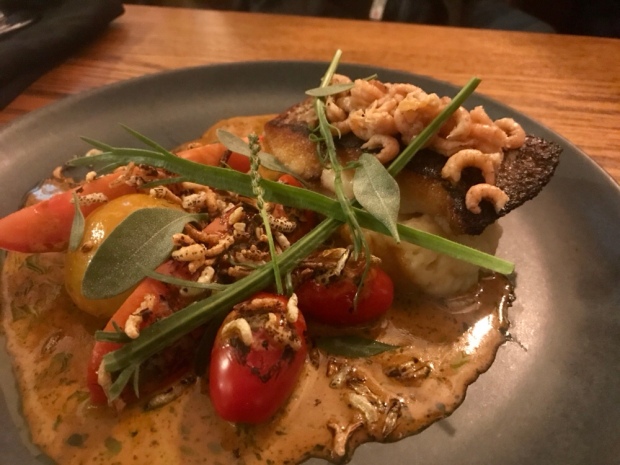 Service is friendly and professional, led by a chap called Johnny who knows the menu inside out. It’s easy to see why The Bluebell has gained the listing in the Michelin guide and the rosettes it has in the two years since it opened; it is approachable and refined, priced ideally for its location. I’m treated to dinner tonight by friends who live locally, though I’ll be back soon and won’t be requiring a chef to ask me.