The first year of trading for a business is the hardest. It is the Litmus test for the projections and spreadsheets, the qualifiers for how well you really do understand the users. For restaurants it is the process of getting the diners to hear about you, getting them through the door, and then keeping them coming back. It is the gradual process of the right levels of stock and staff, tweaking the dishes and the prices, the right opening hours, deals, suppliers, and drinks, accumulating (hopefully) the media column inches and the queues out of the door. It is a hard, unforgiving industry. Many fail, sometimes deservedly so, sometimes because of bad luck or location. I had my concerns for Rebel Chicken; the food was always good enough to return and they had one of the best beer gardens in the city, but would just rotisserie chicken be enough to convince people to walk down a side street in the Jewellery Quarter? They’ve adapted, adding far more to the menu, and transforming that big open plan garden into something that East London would be proud of. This is now a year-round area, complete with sliding roof and foliage. It is unique to anywhere else in the city and deserves credit for that alone.

We come on a Saturday when the sun is beating down and decide to make a day of it. They have a brunch menu that appears to be very popular, supplied under the banner of Ocho – their sister tapas venue next door that I have a lot of love for. It makes sense: they already have morcilla and merguez, they put pulses in tomato sauces and stuff on bread; they already have the basis for a breakfast. The breakfast board for one served as a nice size for two, swiftly removed from the wooden boards they arrive on and on to plates, like any sensible man would. It’s a bloody good breakfast, a perfectly poached egg with bright yolk, toast, beans in the same tomato sauce that normally gets served with the meatballs, mushroom, and three bits of minced animal in natural casing. That’s sausages to you, stupid. Of those three I get happy memories from the densely spiced merguez, and give kudos to the morcilla, which everyone knows to be a far superior black pudding. The most recognisable of them is a pork sausage. A British breakfast banger. It tastes of pork, mace, and a little black pepper. It’s a very nice sausage on a very nice breakfast. At nine quid it’s an absolute steal. 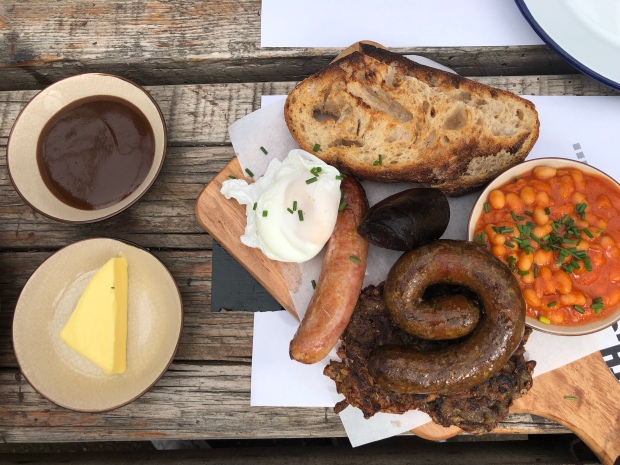 Late morning quickly spilled to afternoon and I’ll use this point to declare my drink of the summer. They do a drink here called Damm Lemon, a light, lemon flavoured beer found on the backstreets of Barcelona by the Geordie manager of this establishment. More refreshing than a cold shower, less alchoholic than a Glaswegians breath; it’s the kind of drink you could, and should, lean on to get you through a summer’s day without looking like a twat. And this is coming from someone who specialises in looking like a twat. 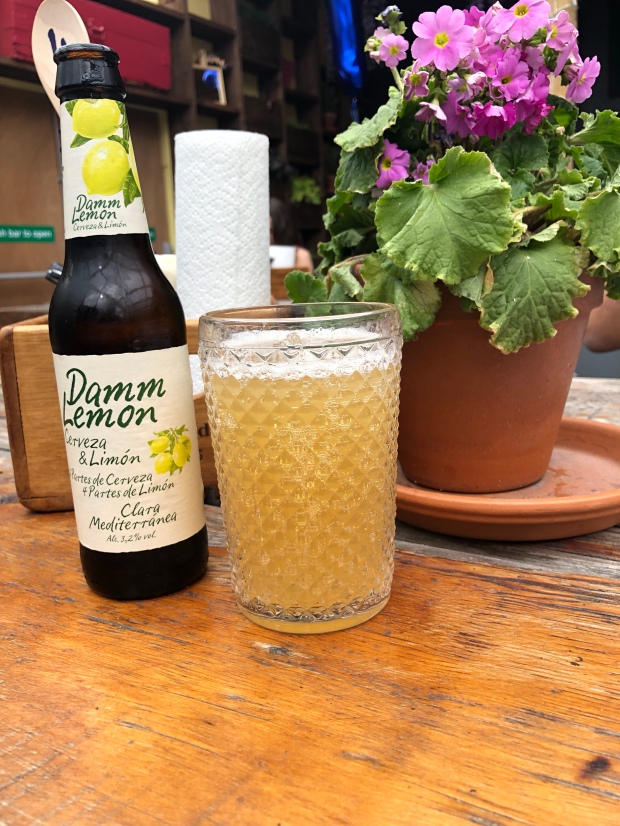 Back to the food. We make the most of the day by seeing how far the food has progressed in a year at Rebel Chicken. Back then it was rotisserie chicken and not much else – now it is only true to its name if the chicken’s way of rebelling is to identify as a cow. There is chicken everyway you can think of — roasted, fried, coated, pulled — but there is also a big section of beef burgers, and stuff like halloumi and falafel just incase the rebel chicken wants to disappoint his father by becoming a vegetarian. We try two burgers, one more conventional, the other a bastardisation of all the bits I want to try in a bun. The food has improved, absolutely no doubt about that. The Yard Bird burger has a chunk of poultry in a buttermilk batter which is brittle and well made. The other burger has (wait for it) beef patty, pulled chicken, halloumi, jalepenos, and caramelised red onion. I wasn’t sure I’d like the beef but it’s good stuff; carefully cooked to a consumer friendly light pink, with good quality meat and a nice fat ratio. The pulled chicken comes from the tasty part of the bird, possibly dressed in too much BBQ sauce, though that’s me being difficult for the sake of it. The rest of it works. Don’t ask me how it tastes as a whole because I have no idea. I’m no animal, despite what you’ll read elsewhere. They have chips, which have improved since the last visit. We don’t finish them, mostly become some idiot made a burger with everything on it. 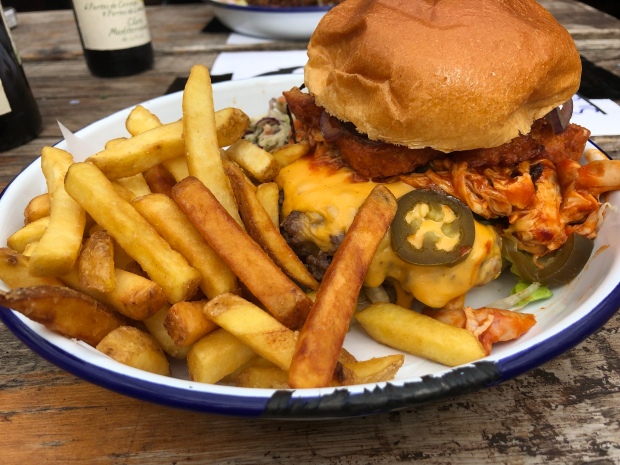 I guess what I am trying to say is it has improved since the last time I was here, fairly substantially in parts. The wider menu has allowed them more freedom to be expressive and it shows; the dishes have a certain swagger to them that matches the decor. Rebel Chicken have not only survived that first year, but have come out in a far better position than when they started it.