This was my eighth visit to Opheem since it opened. I am fully aware that there are other restaurants in Birmingham, but Opheem has a brilliant ability to post new dishes online which make me want to book a table to eat them, which I do, very happily. This time it was three dishes all from the new menu; a skewer of chicken tikka, a monochrome monkfish dish, and a goat biryani. I was supposed to go to Opheem with an incredibly nice man called Nick but that was overturned by my evil girlfriend after seeing the image of the chicken skewer. Nick, I’m sorry. We both know you would have made superior company. 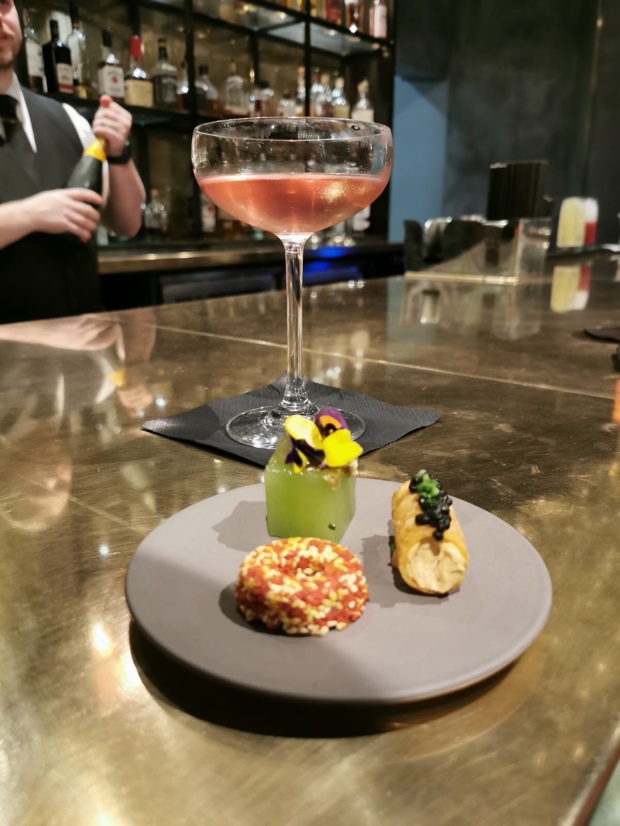 Turns out that chicken skewer is worth the trip alone. Served as an amuse, the first bite in the restaurant after the little bits hand delivered by the chef to the bar area, it is Aktar’s homage to butter chicken. Chicken leg deboned, brined, compressed, marinated, and then cooked over fire, served with a chopstick up its proverbial arse and a coating of something buttery and nutty, crisp skin, and puffed rice. It is what you imagine chicken tikka tastes like but never does; a perfect blend of warming spices and juicy poultry. Unimprovable.

Now the boring bit. I’m going to say what I’ve said several times before and tell you that Opheem has improved yet again. The new menu has taken the kitchen to new heights. More processes (I’m told that chicken takes four days) though ultimately less components. Dishes have cut down on the ingredients and focused on ramping up the flavour. Old dishes revisited and improved. The lamb fat bun still has the lamb patè, though now that patè is inside the bun, whilst that bun can (and should) be dunked into a little bowl of spicy lamb broth. What’s left of that broth should be cupped and drank immediately. The first course of the tasting menu sticks with ovine, a mutton ‘porridge’ which is similar to daal in texture only with long braised strands of meat and a deep hit of flavour. Crispy onions and a little bhaji offer a contrast of flavour for an assured and confident start to the meal. 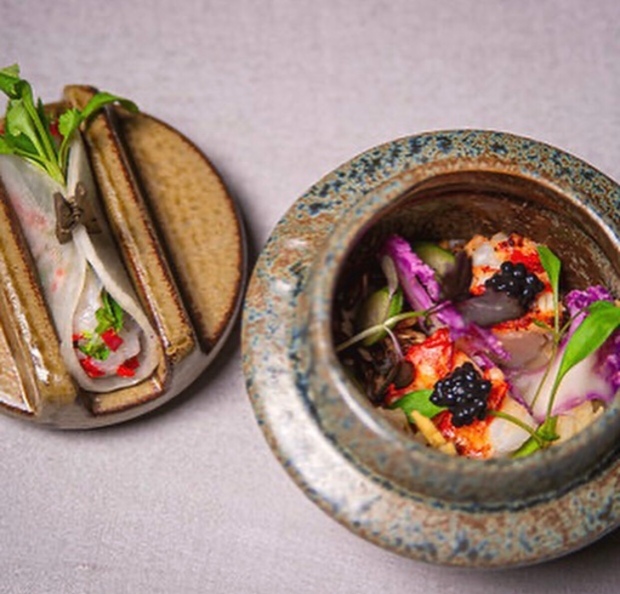 We have the tandoori carrot that you can read about here, followed by a langoustine, caviar, and cauliflower custard dish that I’ve been fortunate enough to try a couple of times during its development. It feels complete now; concise and higher in acidity, it works brilliantly with the tartare of langoustine wrapped up in the celeriac ‘taco’ which cradles a wooden holder to one side. Then the highlight of the meal; a take on monkfish dopiaza, a term literally translating as ‘double onion’. Dark and brooding, the fish has been cooked over charcoal and has just enough smokiness, whilst the onion is present as a sweet compote, spiced roscoff broth, charred shallots, and (I think) crispy spring onion tops. It’s a hell of a dish which could easily sit on a two star menu and not be out of place. It also defines Aktar Islam as a chef: the ability to look at dishes from his heritage and transform them into something refined and modern. 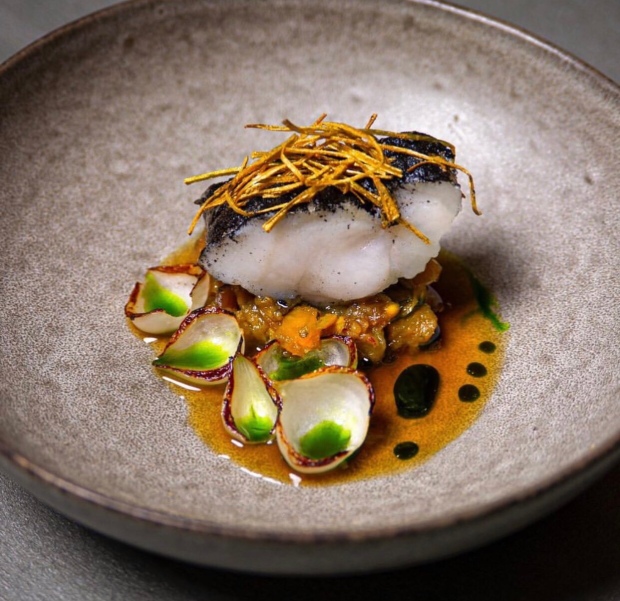 The last of the savoury courses was also the most recognisable: a goat dum biriyani, inspired by the dishes served by his Mother to his younger self, with the pastry lid cut open at the table, as all dum biriyani should. This comes one between two, to be portioned on to the plates containing a goat chop, raita and salad. It is a showstopper, familiar, with an execution of undeniable skill. The biriyani stars; the rice with just a little bite, mingled in with bits of braised goat that whack with spice until licked with the raita. Proper cooking. From the look of social media it appears to be going down a storm. Quite right too.

The first dessert celebrates forced rhubarb, and is, in all honesty, the weak point of the meal given it eats a little one dimensional compared to the vibrancy of everything else. We then move on to a dark chocolate delice with orange gel, and a sweet potato dauphine. It’s a Jaffa Cake we tell them. No it’s not they say. Yes it is: the dark chocolate, the orange, and the dauphine that has a cake-like texture thanks to the choux mixed in with the carb. We’ll agree to disagree here. It’s delicious anyway. There are petit fours because now that they have a star there should be.

The award of the Michelin Star means that prices have risen slightly, but the eight courses at £75 represents one of the best value tasting menus in the region. With this we took the wine pairing that included rose champagne and a very classy Pinot Noir that I am going to be purchasing for home. Service is superb and if they are bored of seeing my face then they haven’t let on just yet. It was as good as rainy Thursdays get. Opheem are unstoppable at present, full of creative flair and desire. Little wonder I’ve neglected most of Birmingham’s restaurants to keep on returning here. Nick, next time, I promise it will be with you.

I travel to and from the best, with the best