Bop Kebabs at The Old Crown

The pubs are open. Hoorah. It’s almost like they never closed. What fun we’re having booking three weeks in advance, planning what five others to invite, paying the deposit, checking the details in for everyone in advance, checking the weather, messaging everyone to tell them what to wear, getting to the venue, downloading the app to order, waiting for drinks, and then realising that you should have brought that coat before being booted off your table after two hours. It’s great. Except it’s not. It’s pretend fun. Enforced fun like double dates and dinner parties. I don’t want to plan where I’ll be in a weeks time. I don’t want to be told that my session is over. Scheduled time slots are the least hospitable thing hospitality can do. I know why it is there but I don’t have to like it. If you really want to ensure my custom, give me a minimum spend and tell me the table is mine until I’m done. I’ll pay the money you want and so will my friends. We’re seasoned professionals at this, not some one-drink catch up.

We were discussing this whilst out with my friend in Digbeth on a breezy Friday afternoon. Digbeth is a funny place. It used to be dark side of cool Birmingham, with the illegal raves and lock-ins and back street drug deals. I’ve been barred and bottled in Digbeth. For the record both were fun. Now it’s full of bottomless brunches for basic bitches who pose for selfies with bits of wallpaper. For an area reliant on its reputation for being cool that’s stage four terminal diagnosis- no amount of radiation is pulling you back from it. Sound the death knoll; I give it three years tops. We tried and failed to get into Zumhof for a burger and then sat in a car park with benches at Lunar Springs for a maximum period of 90 minutes which we underplayed as quickly as possible. I suggested to Jake we go for kebabs at The Old Crown. He didn’t want to go because it’s too young for us. I like The Old Crown a lot. It’s the Patrick Bateman of Digbeth; looks polished on the outside but occasionally dons a plastic overall at full moon. 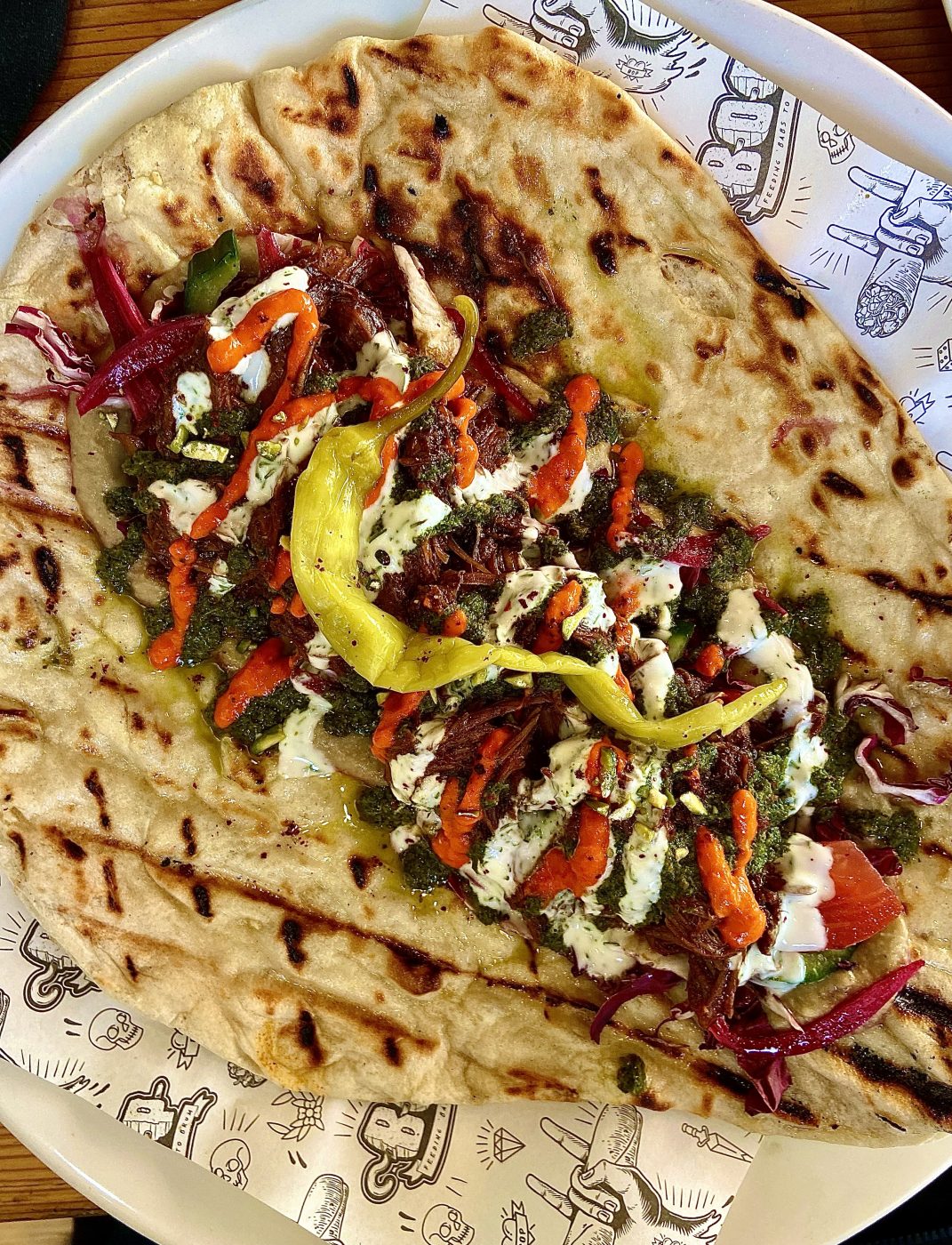 Bop Kebabs are here for a year-long kitchen stint. It makes perfect sense. A raucous brand of food for a raucous boozer. It’s Beavis and Butthead, or the reboot of Bottom. In true old Digbeth fashion chefs look like they need a hug and a nights sleep, not an afternoon on pornstar martinis. I’ve eaten the kebabs many times before and they continue to get better; the chicken skin dukkah which should be sold by the gram, the hummus full of tahini and garlic that still has texture, and the flatbread which could be straight off a tawa in Tehran. The shawarma style lamb that glistens with rendered fat and the chicken which is precision cooked over charcoal. Jake said it’s the best thing he’s eaten this year, though to be fair he doesn’t get out much. I pass the sentiment on to the chef, he looks blankly at me with the gaze of a man who sees the sun as an indication that it’s probably bed time, and not as a reason to rise for the day. I’m impressed. He and the kebabs are precisely what Digbeth needs.