This was supposed to be a recap of both the meals we had booked in at Carters over the festive period, but no, Claire had to pick up a spluttering, bubonic, germfest that had us cancelling all plans and turned me into a tea waiter for two weeks. There are many reasons to hate the know-it-all, boyfriend stealing, Kardashian obsessed, clever clogs tax nazi that is Claire, but few more valid than her ruining me eating good food. As it was, I managed to guilt shame her into getting a curry in as a replacement meal, so swings and roundabouts and all that.

The mathematicians amongst you may have worked out that ‘both’ minus one bout of illness equals one meal. You are going to read about that meal because it was four hundred quid and I want to preserve what already hasn’t been sacrificed to the porcelain gods a long time ago.

It was another amazing meal; I think maybe the best yet. It appears to the eye of this bloated epicurean (yes, I did just refer to myself in the wankiest way possible) that the reins are off and that now we are eating what Brad and the team here want to cook and, more importantly, what they want to eat. Take the partridge that comes at half time; poached in master stock, the bird is butchered, it’s elements cooked seperately, and then reassembled to its original form, albeit axed in two for sharing purposes. The breast meat isn’t going to offend anyone, though some might object to the claws left intact on the braised legs (I don’t), and those people will take equal offence to the skewer of innards which happen to be the best bit. The biggest talking point is up top. The unctous neck meat that leads up the birds skull, beak intact, brain ready to be sucked out. I’m told that this made an appearance last year, but only to the tables they thought would be receptive to it. Now everyone gets it. That’s where Carters is at presently; a brilliant point of realisation of what they do best is what is going out of the kitchen. We ate every bit with Claire not only cleaning the bones but sucking out the last of my share of the brain. It’s yet another reason to hate her.

The rest of the meal was another tour de force of what is right now the best kitchen in Birmingham. The nibbles and bread are pretty identical to this meal, whilst the brilliant scallop brex-o description can save me eighty words by reading it here. We eat barely warmed through razor clams in pepper dulse sauce that is pepe e cacio reimagined by a wizard, followed by sturgeon in a velvety sauce bobbing with caviar. The sturgeon is a new one to me given that I’m only used to eating the eggs of it’s unborn children. I struggle with it as its texture is too reminiscent of trout (the true evil of this planet) though make up for it by mopping up the sauce whilst Claire finishes off mine. She eats mother and daughter. Another reason to hate her.

The menu tells me that we had the partridge at this point, so it’s onto the eight year old Holstein with fermented hen of the wood mushrooms and ‘beer mustard’ which, if I remember correctly from the Calum Franklin event is pickled mustard seeds fermented in beer. I think. They are incredible anyway. The cow meat has a maturity to it that only comes from dairy cattle, layered with funk and umami from it’s accompaniments. It’s a proper plate of food. Then Baron Bigod stuffed with truffle because life is too short to eat it any other way. 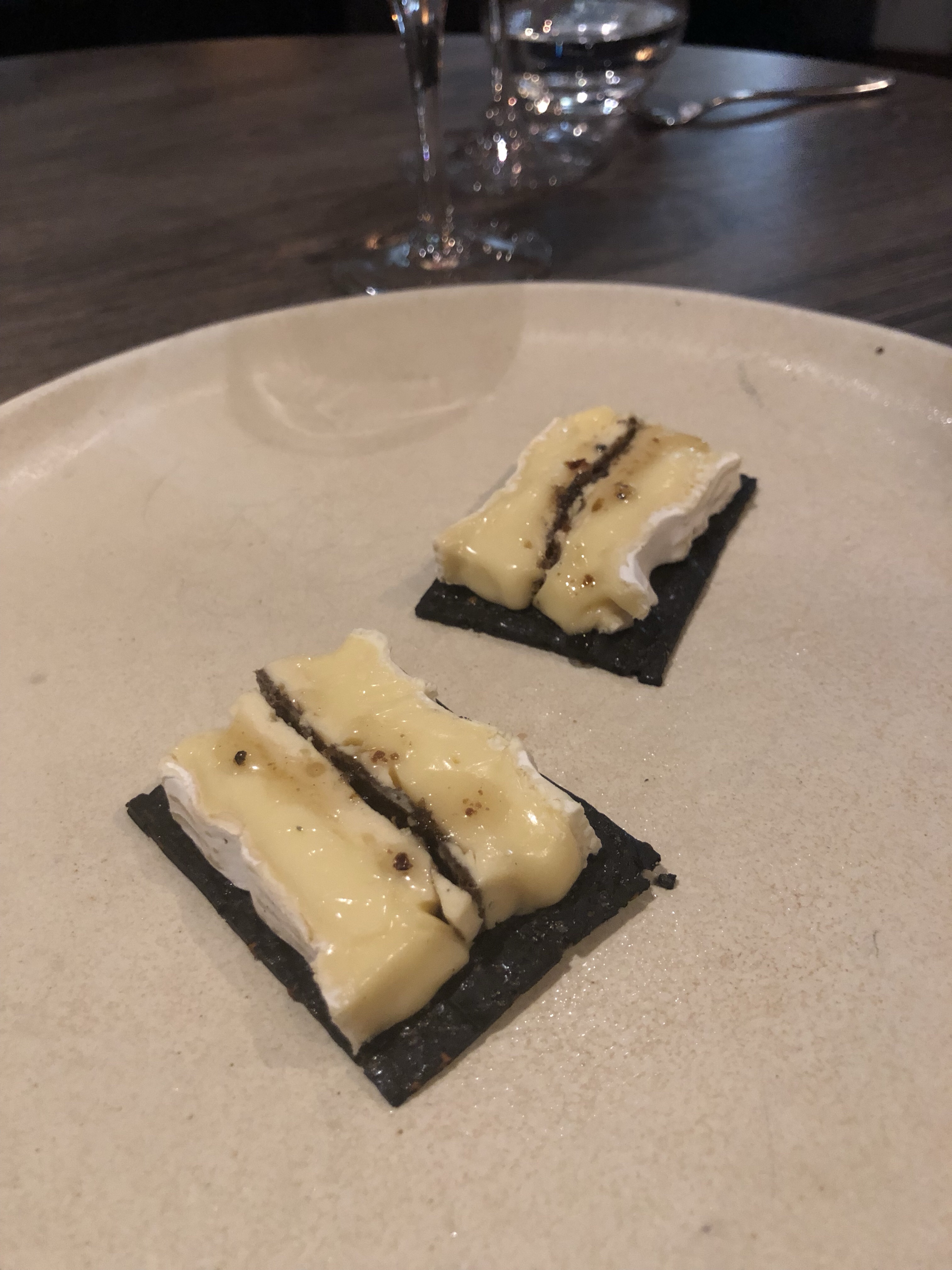 I should point out at this point that Alex and Holly had curated a truly fantastic (and very generous) wine flight for Claire’s birthday and I’m less half cut, more impaled on my own spike. It’s all a bit blurry from here on in, which is probably our fault for polishing off a bottle of something fizzy before the food started. There is a mousse of cornish honey with a prettily decorated shard of something sweet and crispy containing the very bits that the bee feeds off. Lucky bee: my diet is made up of bitterness and partridge brain. The last picture I took was of a chocolate and cobnut tart which I remember being delicious. I think there was something after that, though it could just be more port. I think it was more port. We pay the bill and saunter to Couch for more drinks and a rendition of ‘Bohemian Rhapsody’, capping off a perfect night. The style of cooking at Carters is in a new phase which may not be for everyone. It is most certainly for us. I can’t get enough of it.

Wanna know what else I can’t get enough of? That sweet, sweet A2B.