That sound you hear? That’s my belly rumbling. Eight hours without food and I am now running around Dubai airport, fully aware that I will have to max out my credit card here to get a decent fill. It will be worth it. I know that soon I have to do this all again for another 7 hours to reach my destination, with an even worse scenario of 22 hours and two flights on the way back. I am fading. I cannot function without food. I find sanctuary in the halls of Terminal A, hand over my card and calculate that I will have to work a week to pay for the pizza I am now forcing into my mouth, entire slices at a time. I swear to learn from this experience, whilst calculating in my mind that I cannot afford a second pizza to see me through to the evening, when we touchdown in Saigon. The last time I felt this much trepidation about food it involved a Toby Carvery and the promise of a good meal. And all this from an airline frequently voted one of the best in the world. Welcome on board an Emirates flight.

I decide from this point to log the meals served over the remaining three flights, to see if they are consistently this bad, and to pass on to my psychiatrist as evidence for my nightmares. What follows are crimes against foods not seen since the days of the mystery bag on Ready, Steady, Cook.  My usual style is to put the pictures below the words, though here we will try it the reverse way around, as a kind of perverse guessing game.  Lets start with something recognisable.

Chicken.  Quite unlike anything I have ever tasted before.  The meat was tasteless with a putrid soggy skin that almost single-handily converted me to vegetarianism.  Beneath it were cold noodles reminiscent of a take-away breakfast from the night before.  Only tasteless.  It made my girlfriend heave.  Enough said. 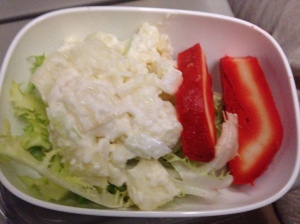 Those two red tumours on the right?  More chicken.  Char Sui style, apparently.  The lip stick sheen added nothing to the meat, other than to pollute my body with unwanted food colouring.  That claggy mess on the left is potato salad.  Honestly.  You had to be there to believe how bad three simple ingredients could be in the hands of the inept.

More chicken.  Emirates like their chicken.  I would like to know where they get they source it from, so that I can avoid it like the plague.  It must live on a diet of water and unhappiness.  This sorry piece was drier than the desert that Dubai Airport sits on.  I needed the small cup of water to swallow one piece and subsequently gave in.  I moved on to the rice and wish I hadn’t drank the water so I could have cooked it properly for them using the steam from my ears.  And yes, those green beans were as revolting as they look. 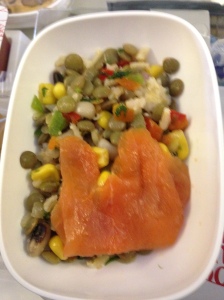 No, not raw chicken.  Salmon.  Horrible salmon, which I assume from the taste was pulled out of Scottish waters sometime in 1987.  The stink and rotten flavour had coated the bean salad beneath.  This was my turn to heave.  And I did.

Those of you who cook a little may recognize the middle section:  That’s right, its raw pasta.  Inedible raw pasta, with some bits of cooked pasta interwoven as an Emirates style tease.  The bit on the left is not a crime scene, but more lumps of that horrid chicken in a tomato sauce that neither tasted of tomatoes, or resembled a sauce.  It was flavoured water, only without the flavour.  Its worth pointing out here that this is a major airline – someone, somewhere has sanctioned this as edible.  Find them and lock them up.

This is the one that upset me most, because on first glance it looks like it could be okay.  Its not.  Lamb stew on the right.  Dense pieces of meat from a cheap cut that hadn’t been cooked long enough.  The brown mess that encompasses it tasted only of black pepper; an achievement considering that it tasted of something.  Mashed potato hid chunks of uncooked cauliflower.  My favourite bit was the water which sat at the bottom of the dish from the undrained veg. 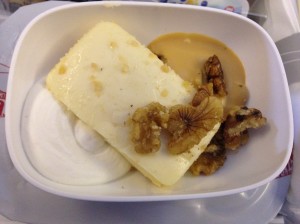 Cheesecake, only not as you know it.  The heavy vanilla topping, the soggy walnuts, the overly-sweetened caramel sauce, the cream.  I needed a sleep, my dentist, and my blood sugar levels checking. 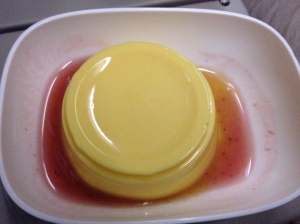 The breast implant above was allegedly mango flavoured.  It was a victory for gelatin; an immoveable mass of nastiness that made my mind wonder back to horrors of school dinners.  If the world enters a nuclear war only cockroaches and this dessert will survive.

And now you can start looking again, for the ordeal is over.  A total of four flights and thirty hours without anything to eat.  I lived on two crackers and a tub of cream cheese on each flight.  Emirates don’t come cheap; we could have flown with a cheaper airline and saved hundreds, but we naively expected a better quality of flight with them.  How wrong we can be.  They will gladly ply you with free booze, which now makes sense, as it is the only way to make the food appear edible.   I have flown with enough airlines to not expect haute cuisine in the air, but this takes bad food to a new level.  The rule of the higher you go, the worse you eat, has never been truer than flying with Emirates.