I wanted to wait a while before writing this. To give it a week or so to allow the emotions to settle and the sheen of alcohol to disperse from the bloodstream. On too many occasions over the last year I have been guilty of bashing away at the keyboard the morning after and letting the previous evenings emotions take over. Scores become a product of the overall experience, rather than the meal itself, which, I hate to break to you, is the purpose of this blog. In truth, a very good meal late last year was probably bumped up to the score it got because straight afterwards we went up The Shard and got pissed on cocktails. Fast forward twenty-hours and I am still high from being high up, waxing lyrically about the day to one and all, with it now reflected over an exaggerated 500 words.  Not this time.  I need clarity: Time to digest, both metaphorically and physically, which is what I have done with last week’s two and a half hours at Le Champignon Sauvage. Now I can confidentially tell you that my initial reactions were correct: It was one of the greatest meals of my life.

The legend of the kitchen here that may go some way to explaining the quality on the plates leaving the pass.  The man behind the stoves is David Everitt-Matthias; a cook’s cook by some stretch.  Whilst others are working their way through the BBC food roster, the chef here is yet to miss a service since they opened in 1987.  He has little care for the modern frivolities of the cooking world, choosing to focus on feeding the diner over his ego.  It is David’s wife, Helen, who presides with grace over a dining room which at best can be described as composed, or dull in other eyes.  Little does this matter for the fireworks are all reserved for the cooking.

From the start we knew we were in for a treat.  Brioche tuile, a bacon muffin of impossible lightness, a cube of something gelatinous coated with chorizo powder, all gone in seconds.  This is followed by a small ceramic pot with a set cabbage cream at the bottom, a bacon foam and some crunchy nuggets of black pudding.  It tastes like the very best of Irish home cooking condensed into a couple of mouthfuls.  The other half half has the same base, with shavings of cauliflower and hazelnut atop.  Miraculously it is the same earthy notes, minus the meat content.  Bread is presented, the star of which is the bacon and shallot brioche.  I ignore the rule about not filling up on carbs and go back to it three more times during the meal. 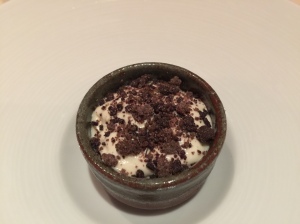 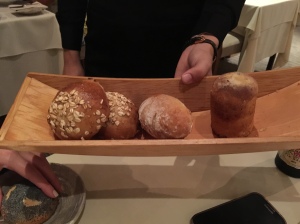 We order fairly priced wines from the Loire and Gironde which come with the seal of approval from Helen and descend into our chairs a little further.  Starters appear, my partners a faultless combination of Jerusalem artichoke and truffle.  The choke, both water bathed and fried, offset against a truffle shaved, grated and reduced it a tar like substance that I would like to take home and slather on some toast.  A scattering of bitter leaves and dots of apple puree balance out the richness.  The one word note in my phone says it all.  Perfect.  It overshadowed my well-timed pigeon breast with baby carrots and spiced carrot puree, but then it would overshadow anything.

Cheap cuts and brawn may not be to everyone’s taste, but to those who it is not, I’m sorry, we can’t be friends.  The wobbly bits of soft porcine meat and fat from the pigs head that lay at the base of my plate would be the starting point for one of the very best things that I have ever eaten.  Add to the mix bits of braised cheek and belly and what you have is a winner.  Croquettes that open up to be molten sweetcorn provide interest and sweetness which would be levelled out by tenderstem and pickled wild mushrooms.  Its intrinsic cooking of flawless work and ballerina like poise.  I find myself scraping the plate for last of the head meat with a crispy bit of pig skin.  If there has ever been a more masculine sentence written than that, I would like to go for a pint of beer with the man that wrote it.

Whilst I was lost in a piggy haze, the veggie was working her way through a dish equally exceptional.  Translucent discs of turnip gently folded over a smoked onion puree, silky smooth and potent in flavour.  It shared the plate with more wild mushrooms, wilted lettuce and peas, both fresh and pureed.  As with the starter, the dish was set up so nothing detracted from the purity of the vegetable flavour.  It is cohesive and expertly judged.

A pre-dessert of set mascarpone with chocolate sponge and coffee nods successfully towards a tiramisu without ever really touching the heights of the previous courses.  It’s a welcome break, though we are quickly back with a mille feuille of peaches and raspberries intertwined with a lemon verbena cream.  I am not usually a fan of shrubbery in my sweet course, though here the floral notes were restrained and in harmony with the fruit of stunning quality. The accompanying peach ice cream was a thing of beauty.  I’ve eaten my far share of mille feuille’s; this may be my favourite. 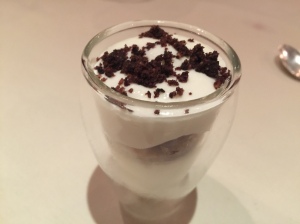 We finish with petite fours that are a step too far for our bulging waistlines.  Amongst them are mini baba doused in rum and a chocolate dusted in liquorice that slips out of my fat fingers and on to the crisp white linen.  I take this as our cue to leave, even if the waitress greets the black smudge with the same cheeriness that has met us with every course this evening.  Le Champignon Sauvage is a lovely place where wonderful things happen on plates without any evident pretence.  My only issue is with my scoring.  The top score I am obviously going to give it puts it up with some very good places, but this is a special restaurant, worthy of top billing on its own.  The clarity of flavour.  The ambition to match the execution on every dish, flawless from start to finish.  I’ll repeat it once again:  One of the greatest meals of my life.