A short post by my recent rambling standards, though one I feel is warranted after the previous post on Tin Lung Heen.  I initially wasn’t going to post on Tim Ho Wan, as it was a quick feeding stop for us, yet it offers a different perspective on dim sum dining in Hong Kong; one that is affordable, albeit still frustrating in a different way.

Tim Ho Wan is often referred to as ‘The Worlds Cheapest Michelin Starred Restaurant’, I statement that I certainly wont argue with.  Those familiar with the criteria of Michelin should dispel any preconceptions and approach with caution.  Fine dining, this is not.  No reservations and a queue at whatever time you visit where you are given a slip of paper and a pencil to pre-select the food.  Once you get through the door its a bit like my sexual ability; over too quickly and prone to disappointment. 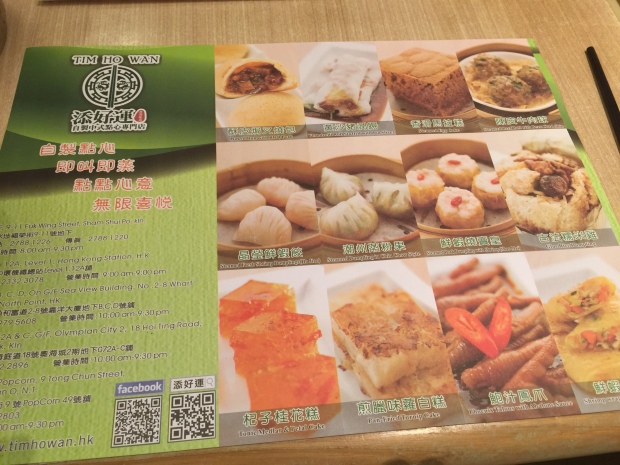 We try a variety of dim sum; fresh spring rolls are gelatinous and difficult on the mouth, the chicken mixture inside light on seasoning.  Turnip cake are bland and slightly bitter.  Steamed beef balls are soggy and slimy balls of regurgitated mess.  It takes baked buns to save the day, donut-like sweet buns filled with soft pork meat.  We order seconds.

For want of a better word, service is not as we, or at least I, know it.  The lady in the queue barks a number to be remembered when its time to eat, servers deliver endless streams of to multiple tables at once, and the bill is taken at to the counter where an elderly lady speaks down to me whilst staring into my vacant soul.  Its an in-and-out operation, cheap and efficient and merciless.  The bill, for three of us and tea to drink, reached £11.70 – less than a bottle of mineral water at Tin Lung Heen – which confirms it as ‘The Cheapest Michelin Starred Restaurant In The World To Not Have A Michelin Starred Experience At’.  Did I enjoy it?  I liked the pork.  But for less than four pound a head I couldn’t really care less.

Hong Kong is a city punctuated with sky scrapers. From the ground they pierce the horizon like needle points, each a place of work or home for people who don’t mind not having a garden. The highest of these concrete high points is the ICC tower, ninth tallest building in the world, to be found via a maze of ground level building sites that will one day be the new financial district. The top floors of the building belong to the very swish Ritz-Charlton hotel, itself home to this afternoons lunch at the two Michelin star Tin Lung Heen, which must be the highest starred restaurant on the planet. It’s trivial, of course, and the height should hardly matter, but there can be few places on the planet where the view is quite as spectacular.

The restaurant is a pretty one; ornate and comfortable, elegant and demure. Tables are dressed in thick white linen, spaced well apart over the thick cream carpet. There are flourishes of red that cut through the glossy black walls, whilst the back wall is reserved for Chinese wines and sakes for those whose budget is non-existent. Indeed, this is a place to splurge; we had to search the wine list for a bottle under £75.00 and held our breath when the bill showed mineral water to be £11.50 per bottle. Those dining here come for Catonese food with the most precious of ingredients – they do not come expecting a bargain.

We start with two dim sum: Excellent cuts of Iberico pork shoulder, barbequed to a dusty pink and glazed  with honey, are stunning – the meat dissolving on the tongue without any effort.  The other was a steamed dumpling with dried scallop, fish maw (dried bladder, if you really want to know), and shrimp.  It was the taste of the sea if the sea had curled up and died, all wrapped up in a soggy polythene casing.  This won’t be the first time that I say this, and I am sure this was exactly how it was supposed to be prepared, but it wasn’t for me.  The flavour was too stagnant, the texture too alien.  It was lost on me, and I’m quite happy for everyone to know that. 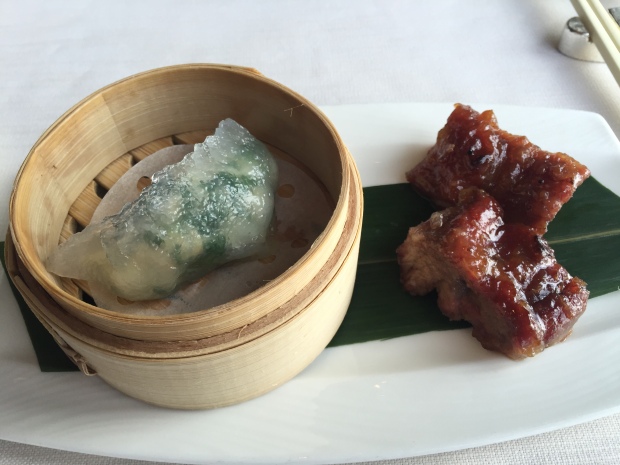 My face said it all on the next course.  A murky soup with lumps of boiled pork shin so grey they could have passed for British summertime, with winter melon of no distinct taste and more of the dried scallop.  There was dried longon, a bit like lycee, which added the faintest of acidity.  It was not nice and none of us got close to finishing it.  Our waiter, the brilliant and affable Leo, tried his best by offering an alternative soup, but by now we just wanted to move on it from it all.

We moved on to accurately cooked scallops, with souffled pastry pieces and a finely chopped salsa of green onion and ginger.  On the other side of the plate was Chinese kale, which tasted a lot like tenderstem broccoli, and pine nuts.  The precision of all the elements was two star cooking; the veg precisely prepared and cooked, the scallops with a gently caramelised crust.  It was just dull.  Nothing slapped you around the chops or gave you a hug. The morsels of duck that followed were so tender that canines nor molars were required to work, sat in a deeply flavoured black bean sauce to which we piled in rice full of interest with bits of goose, abalone and shrimps.  Lovely, yes, though hardly two star worthy. 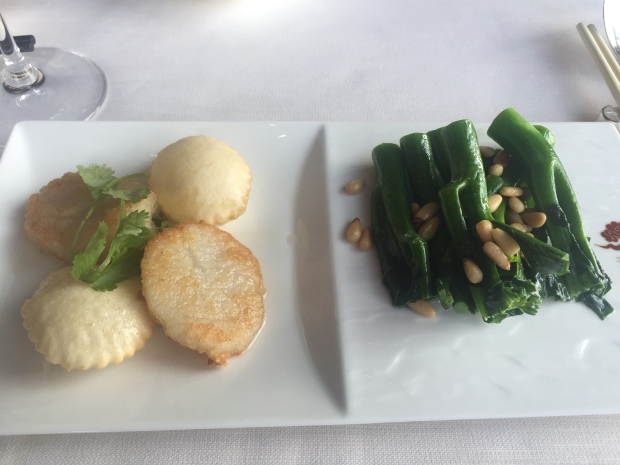 We finish on a dessert that would divide the table.  A set milk cream (panna cotta, if you so like), with a gelatinous peach compote and a fat slice of black truffle.  Whilst my dining companions hated the way that the truffle bullied its way through the dessert, perfuming the milk and overpowering the peach, I actually quite liked it and ended up with three lots to eat.  The honeyed bit of pastry on the side was a nice sweet note to end on, the over set grapefruit jelly less so. 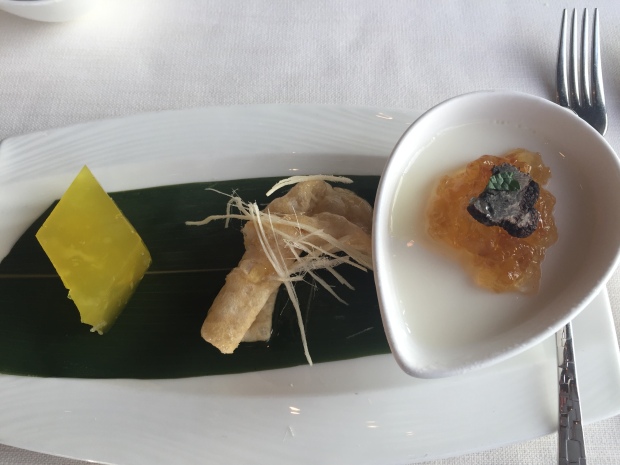 I’d read a bit about the dubious nature of Michelin in Hong Kong prior to my trip and this meal confirmed pretty much all I read as true.  Maybe I’m wrong, but nothing struck me as truly two star cooking.  Yes, its precise and yes they use luxury ingriedients, but many of those ingredients added nothing to the meal other than an increased cost.  Maybe it’s me and my uncultured western palate.  We indulged a little in the wine list and left with a hefty bill that quickly soared into the hundreds.  For that we had the loftiest of views in a lofty city and a distinctly average meal that left me feeling a little cold all over.

Little Bao is so cool it could be a refrigerator. So on trend it could be a catwalk. So achingly hip it could be arthritic. And I am not alone in this opinion. This I know because eleven minutes after its 6pm opening time, a queue has formed outside the door where a lady with a clipboard organises swarms of people on benches, whilst we look on from our bar stools overlooking the chefs at work. A perk of English punctuality. People queue for a reason; these are not tourists like us, but those who know what they are getting. And they know what we now know – what you get at Little Bao is worth the wait. It is so so good. 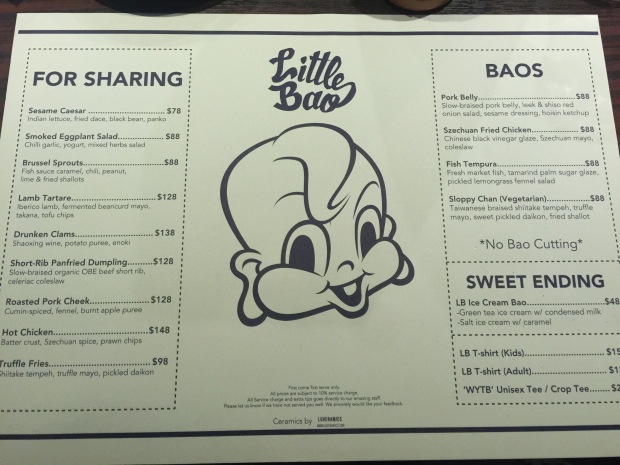 For those uninitiated, a Bao is a steamed milk bun of Taiwanese origin, filled and then, if you are anything like me, quickly devoured.  You don’t need to go to Hong Kong for one – that would be an unnecessary expense – given that London has a restaurant group that specialises in them, and they can be found at numerous street food companies across the country.  But we are in Hong Kong and we have hunted this down like it is the last Thylacine and found the small galley restaurant in the heart of Soho.  Hip-hop plays, the chefs wearing sleeves of tattoos underneath the t-shirts bearing the logo.  Its loud and visceral, pounding with youthful energy. 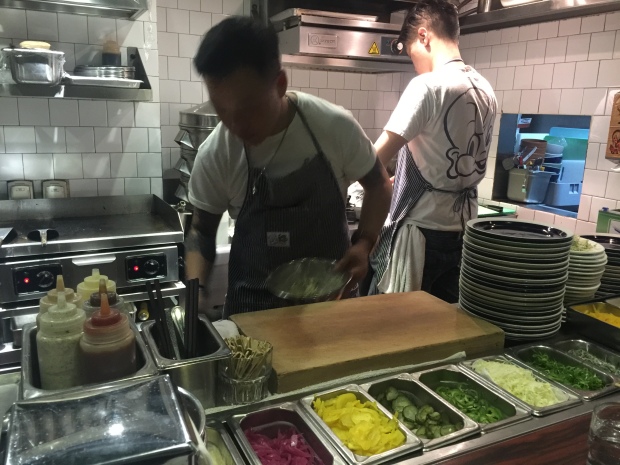 I will move on to the main event in good time, though first the sharing plates, each priced around the mid-teen mark when converted back to sterling.  Dumplings, opaque on the underside and pan-fried to a blackened crisp on top, are filled with a beef short rib mixture that has been braised to a tangle of soft meat.  The star of the dish is hidden underneath; a coleslaw of celeriac, not too distant in make-up from a remoulade, which adds a earthiness and crunch to the soft dumplings.  Its a compelling piece of cooking, familiar, yet still a statement of intent.  We fight over the last one. 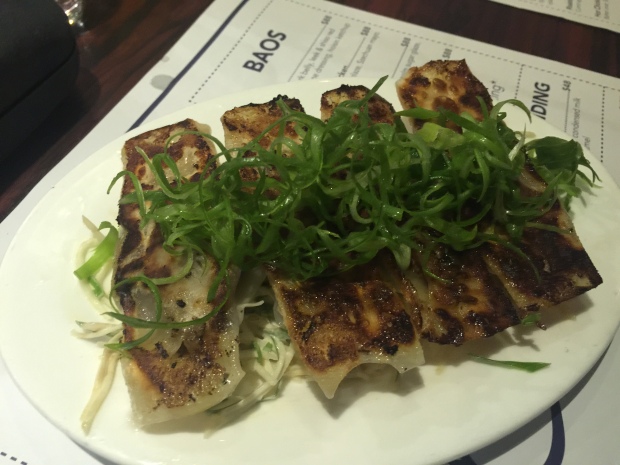 Pork cheek is one of my favourite cuts of any animal, cheap, usually slow cooked, and packed full of taste.  Here the meat had been roasted and then sliced to robust cuts of pig, each glistening with ribbons of rendered fat.  The texture was denser, the meat still tender.  A caramelised apple puree, smokey and with a hint of, I think, clove, was smeared around the edge.  Ribbons of fennel spiced with cumin are a revelation.  Who would have known that the anise funk of fennel could be tempered by the pepperiness of the cumin?  Little Bao does, obviously.

And the bao’s?  Cushioned pillows of milk, flour and yeast which are the ideal bland vehicle for the complex flavours inside.  The pick of the three is the white fish in an ethereal tempura batter, with a sweet and sour tamarind sauce and lightly pickled fennel.  Another has softly braised pork belly, dressed in hoi sin and balanced out with a red onion and shiso salad that is almost as good as the one with deep fried chicken, sharp with black vinegar and hot with Szechuan.  Its like I imagine the best KFC Zinger burger tastes, only without the genetically modified chicken. 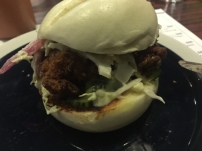 We finish on another bao, smaller in stature and fried to a golden crisp.  Inside is a salted milk ice cream drizzled with a caramel sauce.  Whoever thought of this has a mind of pure filth and should become my new drinking buddy with immediate effect.  Remember what I said about not having to go to Hong Kong for Bao?  I take it back.  Forget the Christmas presents for the aunt you don’t like and book yourself a flight.

This being Hong Kong its maybe a little more than we would expect to pay at home.  The Bao’s are just under a tenner each, cocktails around the same price.  I leave with a bill of just under a hundred pound, which may seem expensive given the casual nature of the restaurant, but seemed very fair to me.  Its a place I could have happily stayed in and indulged in all night, though it was only right that we stepped outside and gave the next in the queue their turn.  It may be little by name but the flavours here are massive.