As I write this post a Vietnamese lady is trying to get into my bed. Don’t worry, my girlfriend is aware of this. In fact, she is watching. The lady in question has been trying all afternoon, and who can blame her; my bed on the sleeper train is deemed luxurious by local standards. We are supposed to be sharing the berth with two other ladies, who appear to have told everyone about the English couple armed with playing cards, rum and Ritz crackers. At one point there were nine in here watching us play Rummy, all eating a bark of some kind and gobbing the residue into a bag. Now there are six. I am covered in spittle and would like to eventually get some sleep in a bed on my own. I am trying desperately to take my mind to a happy place.

My mind takes me to Tipton, to Mad O’Rourkes Pie Factory, where I was a few days before we upped and left for the other side of the world. It’s a pub full of cliches; saw dust on the floor, a cardboard cut of Desperate Dan with the face missing for the idiots who cannot resist the photo opportunity. I was one of those idiots. It was impossible not to be. Even now, with the spittle and the glaring stares, I am smiling reminiscing about it. 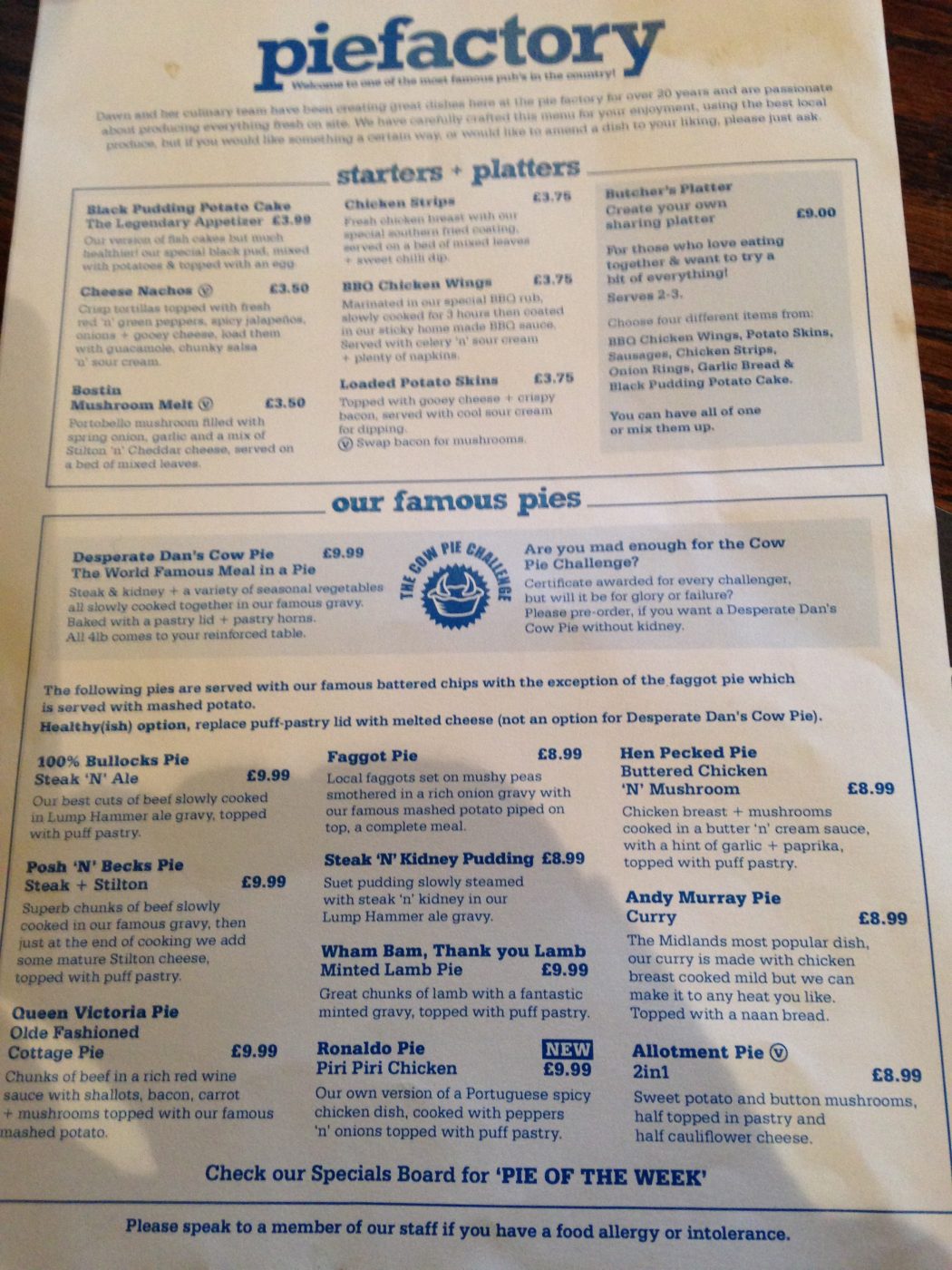 Back home, pie is something we take seriously in our household. Charlie, my long suffering partner, makes a mean one. She will cook the protein in the slow cooker until it falls apart at a gentle poke, add it to the blind-baked pastry and give it some more gentle love. Mad O’Rourkes take it further, to the extent that they claim to be “World Famous” for them. Although a little far-fetched, they probably should be. Steak and Stilton sets the tone, the meat cooked long and low until the point that the need for molars becomes redundant. The thick sauce smacks of bovine which more than stands up to the pungent cheese. The puff pastry topping is so good it has to be shop-brought. For once, I don’t care.

More of the same appears with a chicken and mushroom pie, the cream sauce spiked with garlic and paprika heat. Again the meat is so tender I don’t know how it could be possibly be from the lean breast of the bird like they advertise. The pie, as with all of the others, has a side of battered chips which would get my vote for replacing Prozac on the NHS.

The next two take the rules of pie and feeds them to the penguins at nearby Dudley Zoo. A chicken tikka pie is topped with a naan. Yes, you read that right. It’s like being back at my local Indian, only with chicken that tastes like chicken and with battered chips. Oh, those battered chips. A faggot pie has funk and the faint tang of offal, like all good faggots should. At the base is mushy peas the colour of Kermit the Frog. Mashed potato and more of that beef gravy fill in the rest. No pastry. It’s complete as it is. There are puddings, which include a chocolate cake and sticky toffee pudding. We enjoy them, because they are good and deserve to be eaten, though we never needed them.

They do a Desperate Dan pie which comes in at a whopping 4lbs of steak and kidney, topped with puff pastry horns, which caused instant envy when it arrived on a neighbouring table. I could pretend that this is reason to return, but it would be lies: You don’t need to justify anything when its this good. I look at across at the bunks to my left and feel sorry for them, for they will probably never get to taste what is now running through my head. More spittle lands on my arm as one of the ladies is sick into the plastic bag. I’ve made my mind up; its Mad O’Rourkes for me again as soon as we touch down.