Such was the brilliance of Opheem that we found ourselves arguing about the best bits for hours after our meal. Was it the deboned, rolled and stuffed trotter on the pork main course? Or the subtle use of jaggery to add a treacle flavour on the lamb dish? Maybe it was the acidity of the raw mango with the softshell crab? I always think that it says a lot about a place if you remember the garnish as much as the protein, and here we are, two blokes sat in a boozer discussing the finer merits of what my mate Jim thinks it is the best meal he’s eaten in Birmingham and me adamant is the finest Indian food I’ve ever had. We go over the small elements over and over, where on the plate every ingredient matters. It is a meal of outstanding taste, that much we can both agree on. 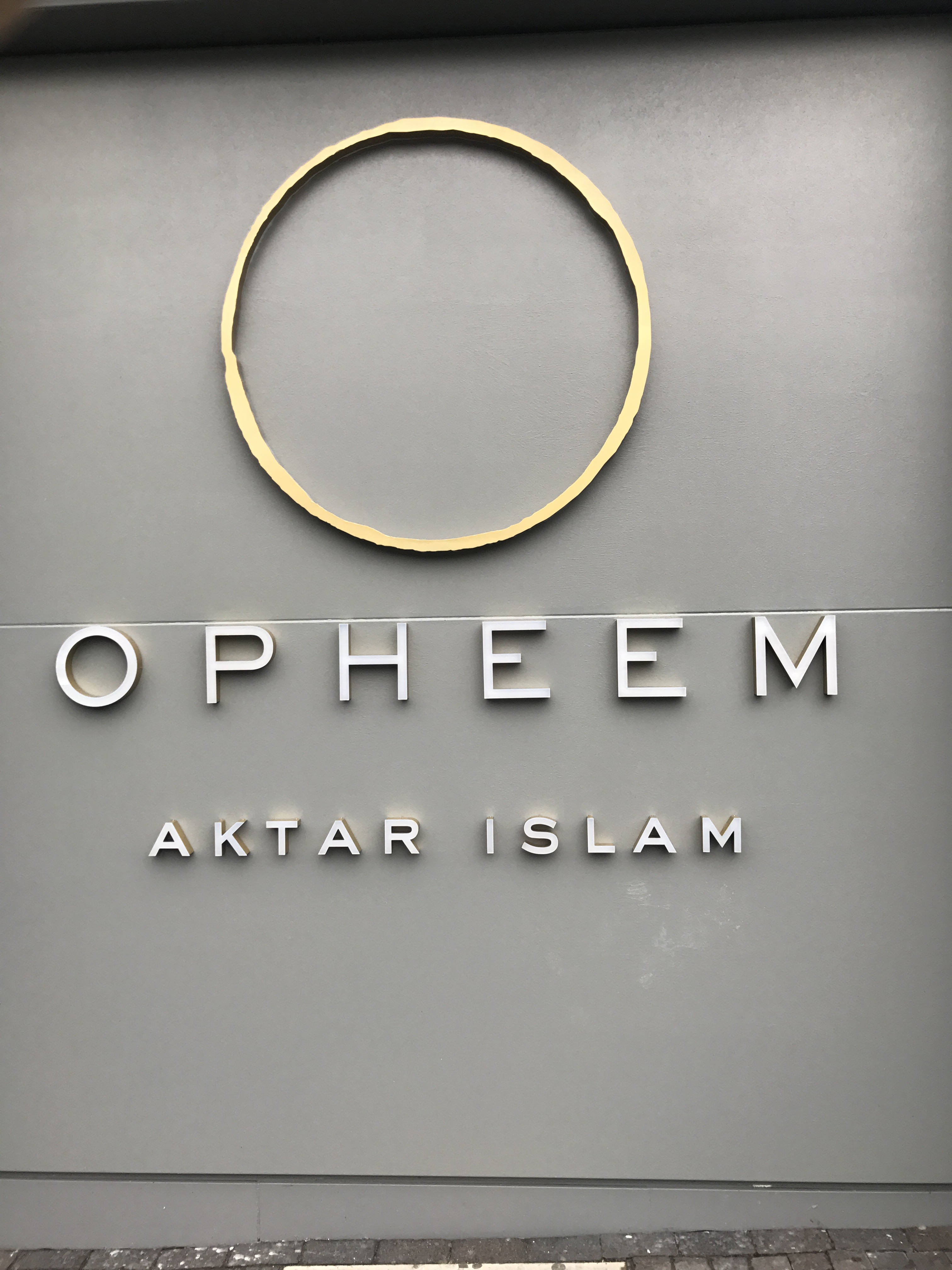 This will come as less of a shock when you learn that Opheem is the new restaurant of Aktar Islam, long servant to the city from his time at Lasan where he won The F Word’s best local restaurant, and TV chef from Great British Menu and Saturday Kitchen. Aktar has gone it alone now, with a large dining room and bar where a notorious nightclub once stood. The space has an industrial feel with lots of brushed concrete effects, whilst tables are spaced far enough apart to upset an accountant. A glass partition separates the dining room from the open kitchen. Aktar is present at the pass, tasting and casting his eye over every dish. There is fire in those eyes.

I’ve been eating his food for years now, and this feels like him cooking without fear or constraint. The flavours are familiar, though there is a lighter touch to the spice in general, and more purpose in the complex techniques. Of the three snacks that launch our dinner the clearest example of this is the use of sphererification, the gel membrane releasing a spicy tamarind water when popped whole in the mouth. It is pani puri reimagined via molecular gastronomy that has more in common with Indian Accent and Gaggan than the Ladypool Rd. And then there is a tempura oyster with spiced batter and puree that tastes cleanly of tomato chutney. Only a onion bhaji style fritter is instantly recognisable and even then it’s greaseless and a world away from the norm. 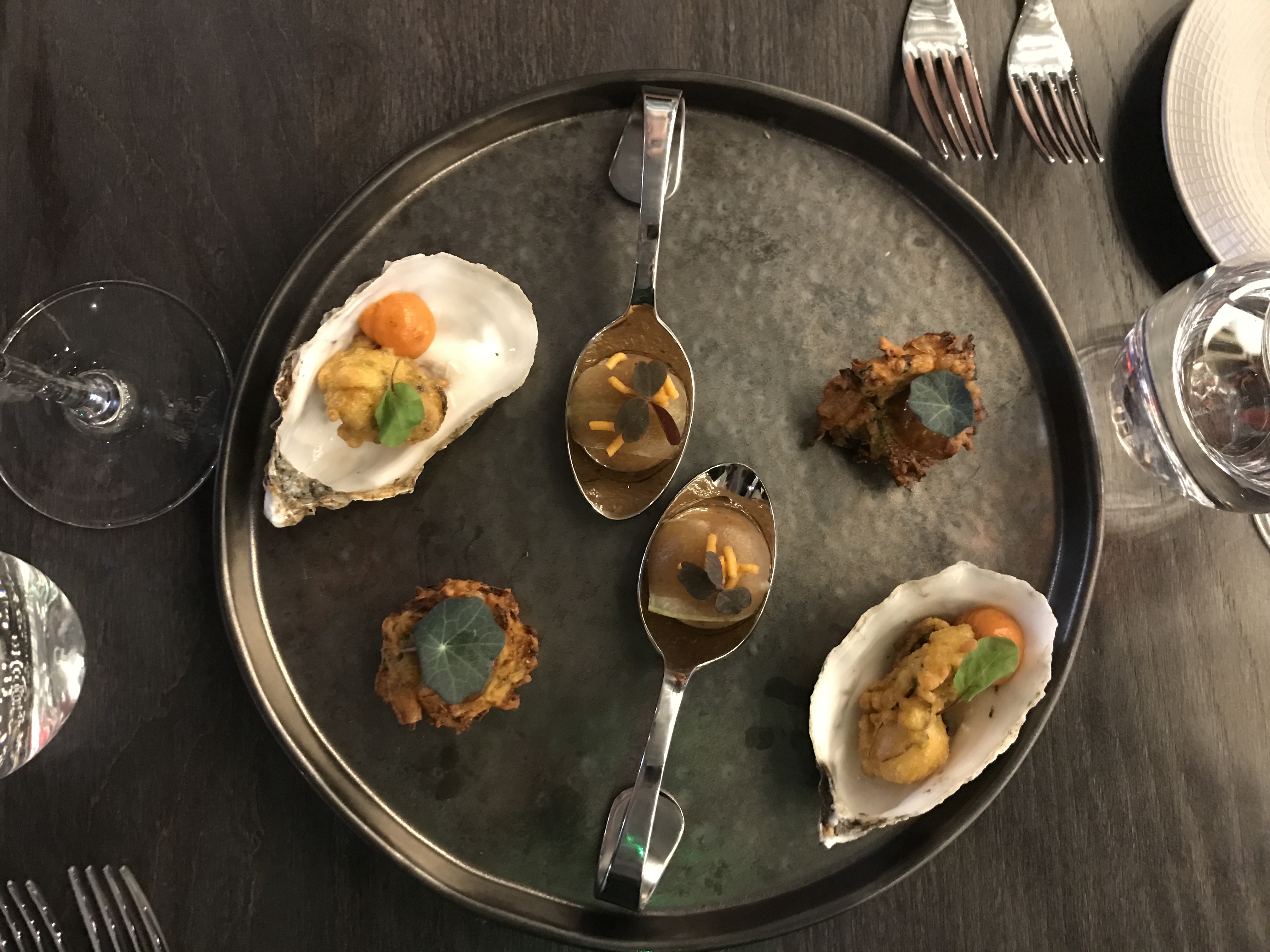 There are nods to his previous accolades on the menu and from this we take the soft shell crab dish that pays homage to his winning fish course on Great British Menu. The batter on the crustacean is delicate, the crab itself tender. A silky puree of raw mango has all the acidity and sweetness it needs, whilst the fermented rice batter bowl it comes in at first feels superfluous until you realise it adds a nuttiness and additional texture that enhances the dish. Everything has a purpose. 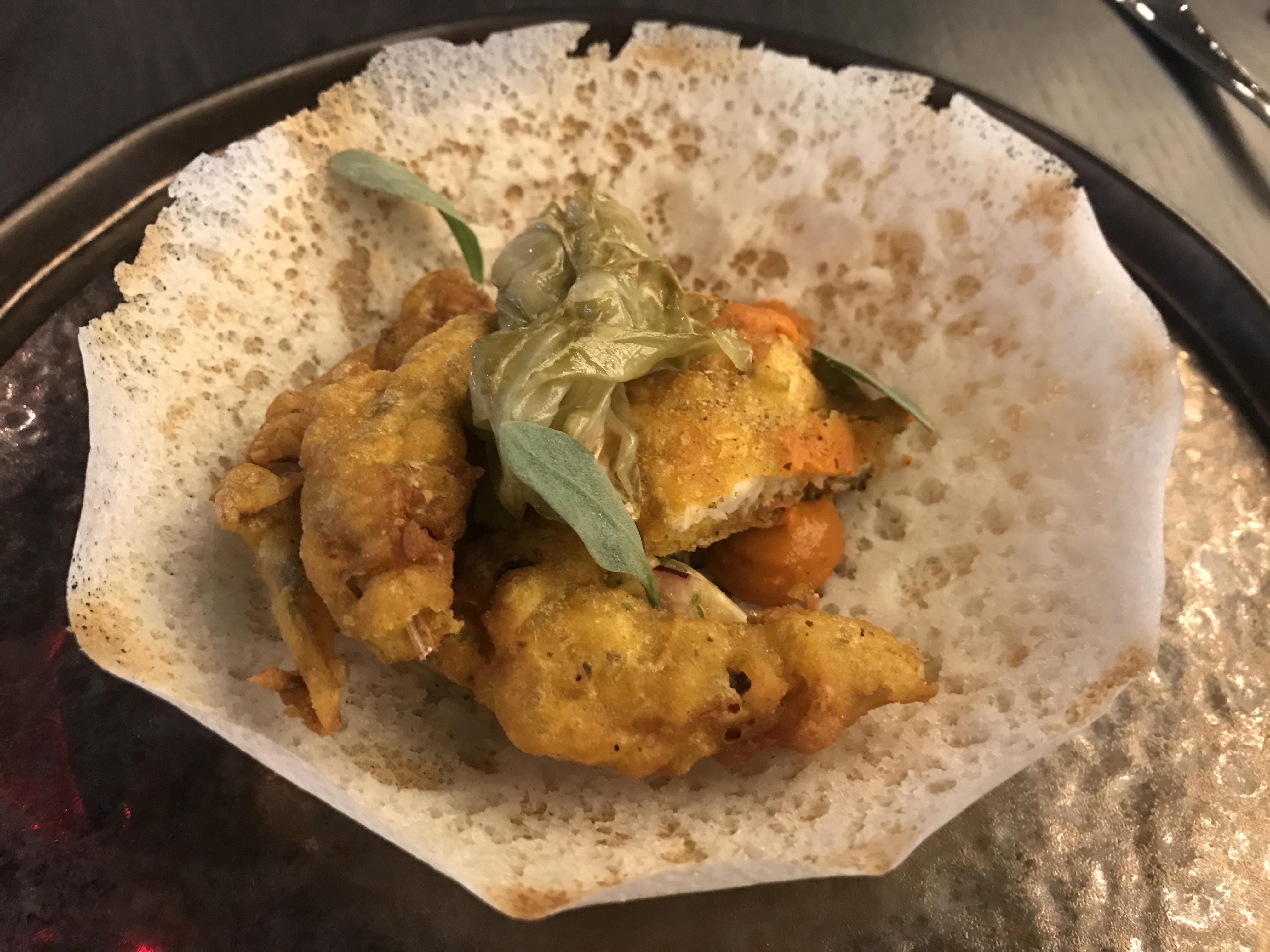 Chicken comes smothered in a moss green mass of herbs, the marinade breaking down the protein in the meat so that it is implausibly tender. A simple salad of heritage tomatoes is all it requires, along with a little more of the same diced fruit and a yogurt dressing. It is fresh and clean in taste, with a predominant flavour of herb over spice. There is an intermittent course of sweet potato and cumin bread with a lamb brain pate; a nod to him smearing his mothers cooking on to crusty white bread as a youngster. The delicate jewels of offal still pronounced in amongst the robust spices. His mother clearly taught him well. 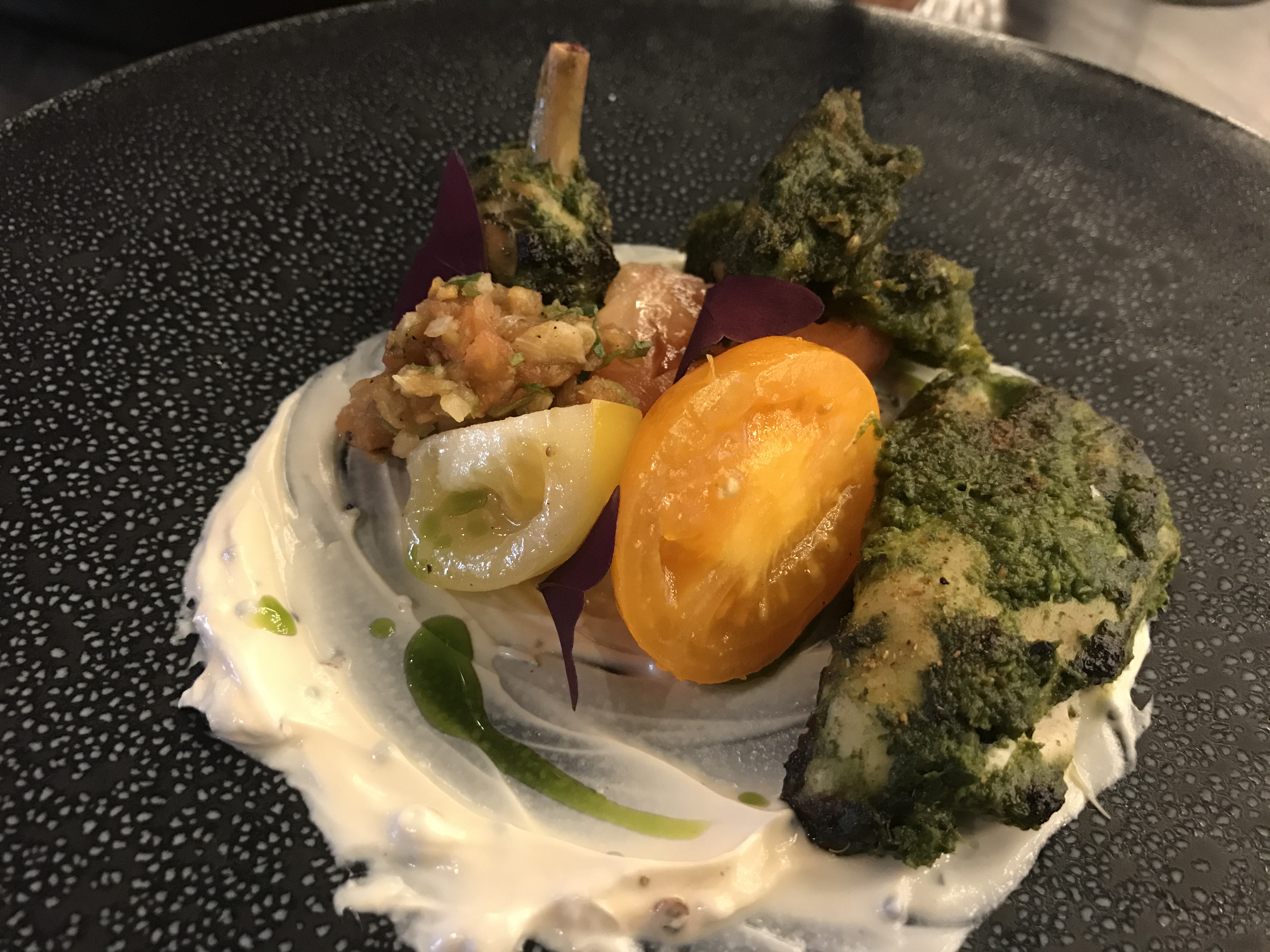 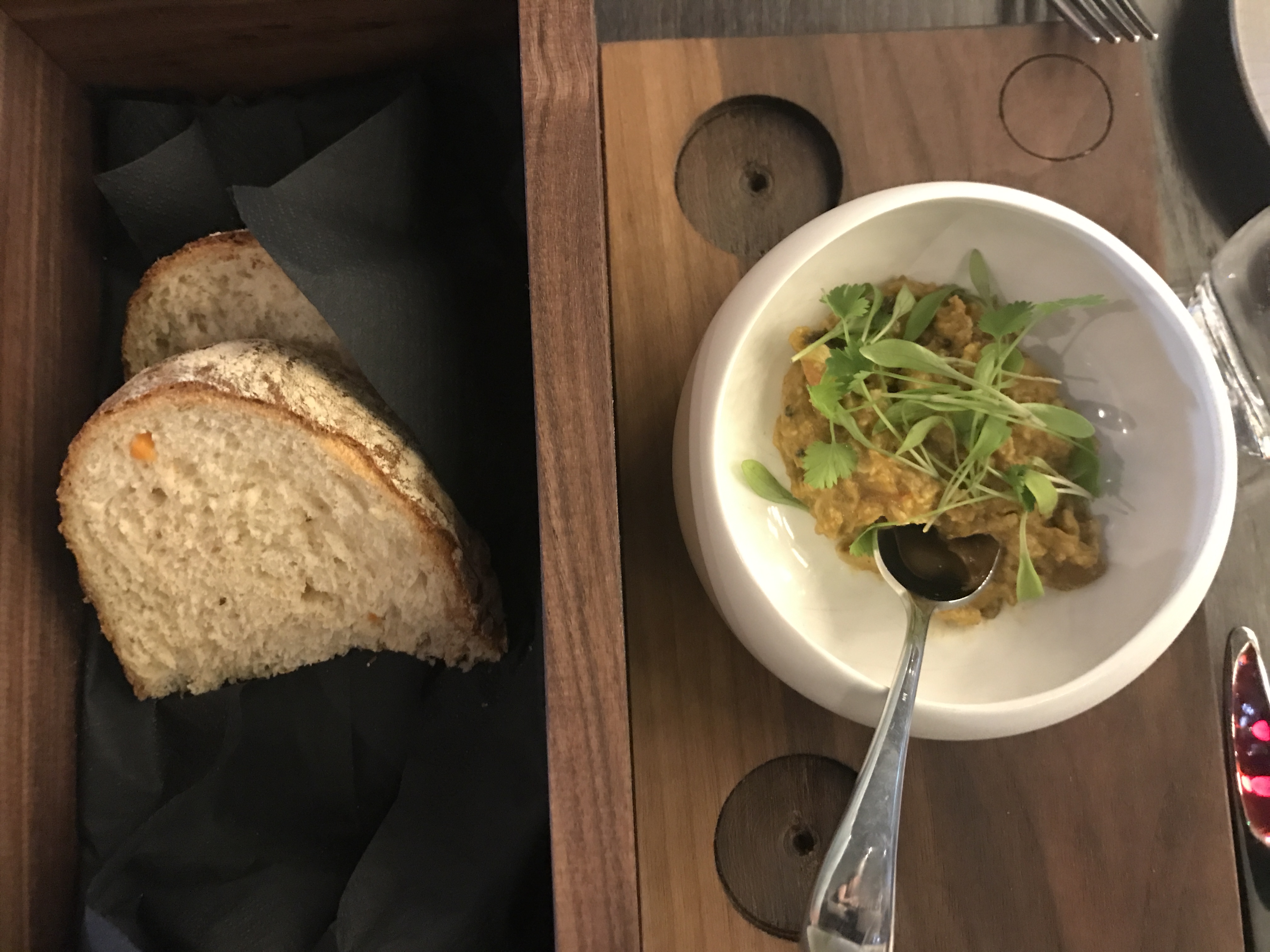 Mains show the concept of Opheem in full force; one that takes the traditions of India and recreates them. Traditionally a spicy mutton curry, Laal Maans is reimagined with slices of pink lamb loin and crisp beignets of tongue joining pearls of smokey aubergine and barley. The gravy style sauce pulls it back towards its roots though there is obvious alchemy involved with the liberal use of chilli and silky bone marrow. Pork is given a similar treatment with pink cuts of loin, a pastilla of smoked ham hock, and the rolled trotter that I am still dreaming of. There is so much to get excited about on the plate, like the carrots cooked with star anise and another killer sauce, but the genius element is the puree of vindaloo that is ferociously hot with chilli and soured with vinegar, just how you’d find it in the beach shacks of Goa. It is this that is the highlight of the meal. It takes everything it touches and throws it into the clouds. 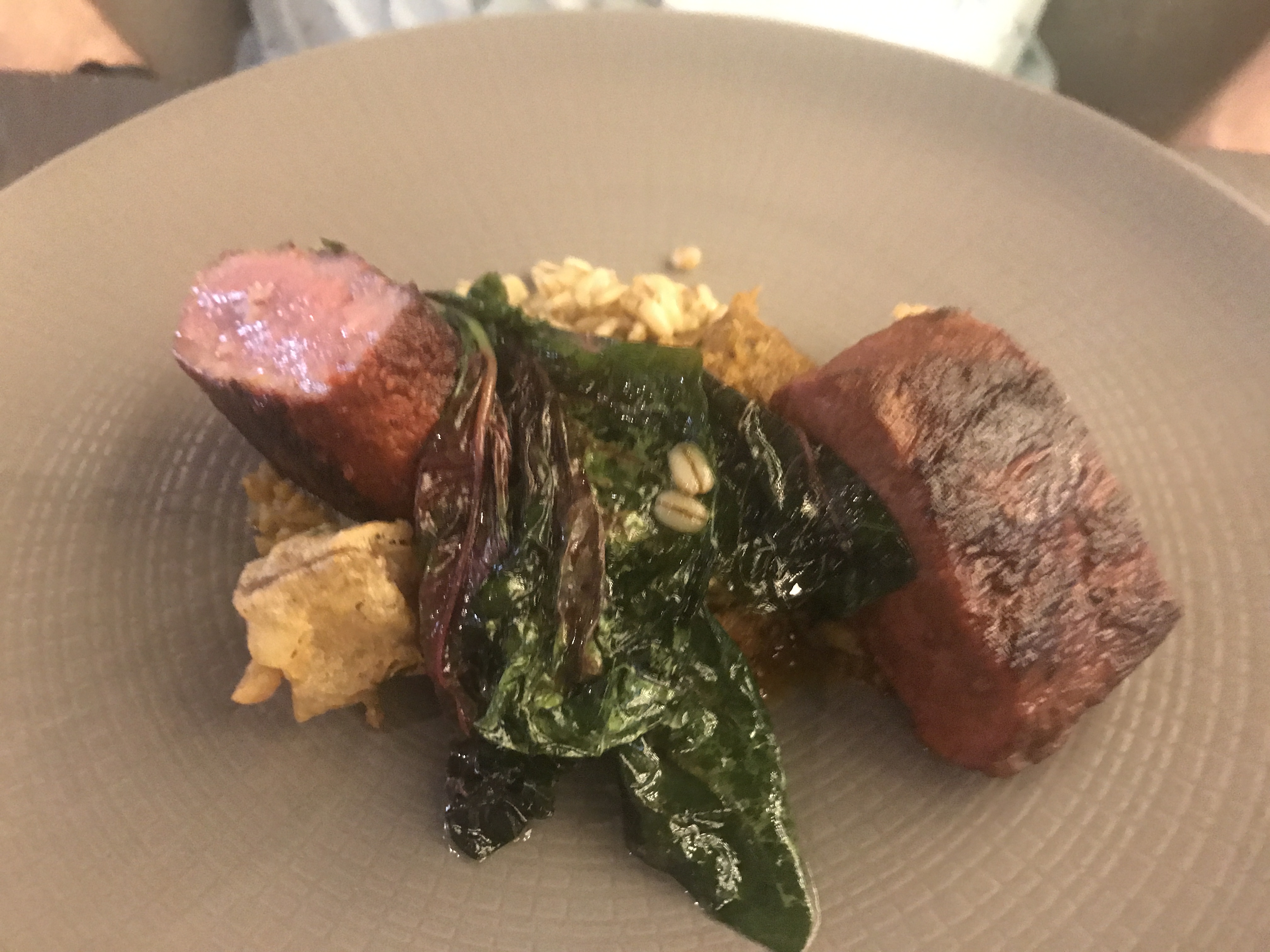 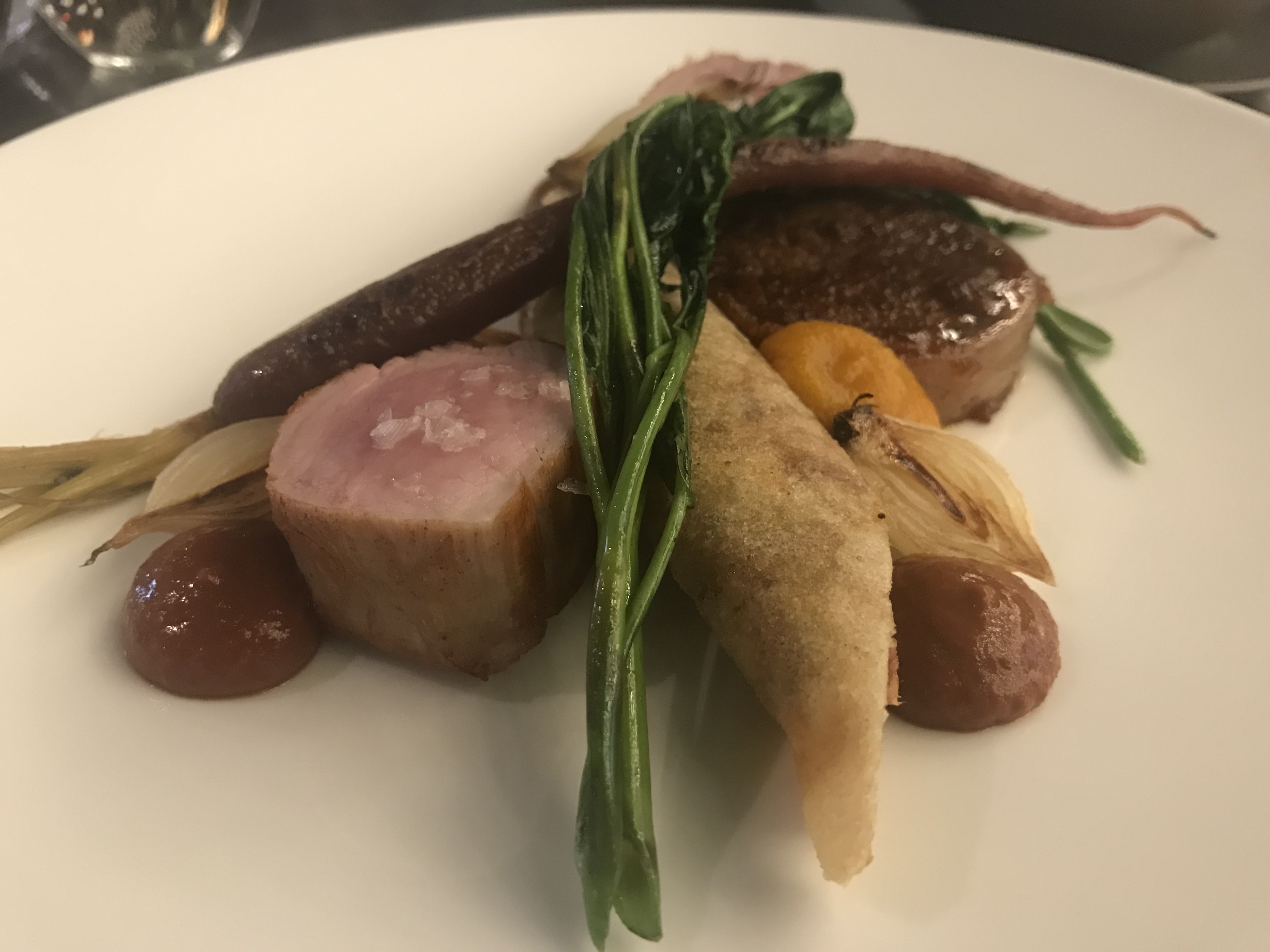 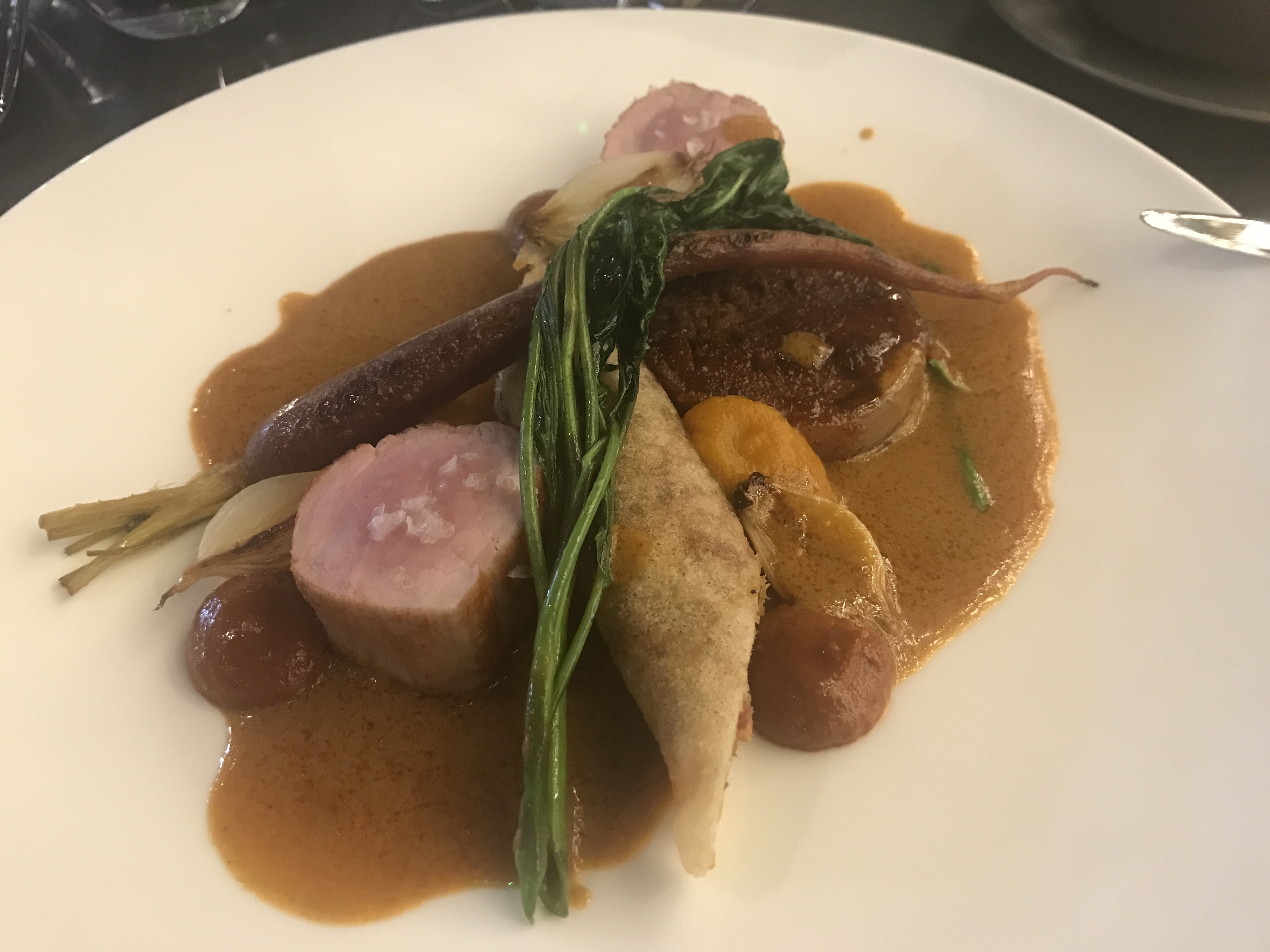 Dessert is a fragrant rice pudding panacotta served with various preparations of rhubarb, which include more molecular dots of jammy fruit and a sorbet of astonishing depth of flavour. Indian desserts are often the weak link, yet here he is proving that a little classic European cooking technique can go a long way at rectifying that. It is a smart move and one that guarantees I go home happy. It is is well balanced and pretty impeccable in delivery; Oh boy, does this man do flavour. 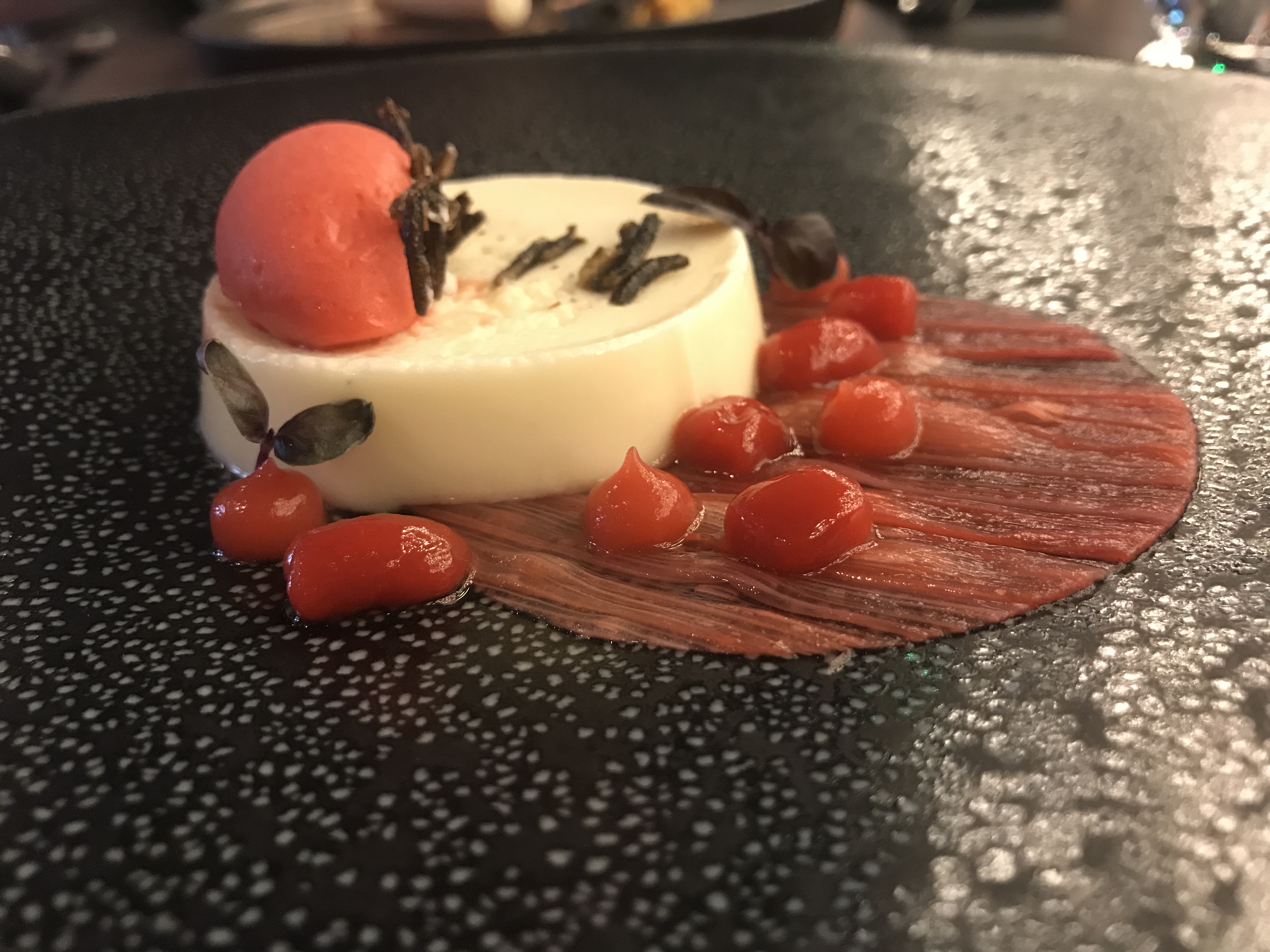 And that concludes a truly superb meal. One that isn’t just a coup for the city of Birmingham, but is important to Indian cooking in this country. I’ve seen what the best in this cuisine has to offer and in my eyes Opheem already stands up to them, even surpassing them in places. Aktar Islam has been long touted as a standout talent, yet Opheem feels bolder than ever before; the product of a man cooking without shackle and allowing that creative stream to run riot. It is fresh yet relatable, distinctive cooking from a man clearly in tune with his craft. We are lucky to have Opheem in this city, but we must share far and wide. Food as good as this deserves celebrating.