The first Franco Manca I had was also my first great pizza experience. Let me take you back. It was the Summer of 2010, way before any idea of this blog occurred, when I was lean and with a full head of hair. I was in London with my mate Barry to see Kings of Leon, a band who were once good, despite what their last three albums will argue. We had lunch at Gauthier, beers in Camden, the gig, and then back to Camden. In the morning we hopped on to the blue line for what seemed like an eternity, stopping at Brixton for pizza at the original Franco Manca. I’d done my research; I got the joke about Frank being missing; I knew the queue would be big and the menu short. We went and it was incredible. In my head it is one of the best meals I’ve eaten – nonsense of course, but still a testament to how thrilling some cooked dough and a few ingredients can be. Franco Manca is the primary reason we have Neopolitan style pizza in the UK: they gave this style to the masses with thirty-six sites in London, and another eleven further afield, including a new shiny Birmingham site.

Now cutting to the crux (or should that be crust?), do they still provide a great pizza experience? No. And I don’t think they have for years in all honesty. I recall a really average pizza at Broadway market three years back, and likewise at Kings Cross a year or so after that. Maybe they were never as good as I think they were, or maybe the competition that they created have surpassed them with ease. It’s a good pizza, but good pizza isnt going to pass muster when we have some excellent pizza already established in this city. It starts well enough; a starter of lamb sausage with potato and spicy tomato sauce is comforting and big on flavour. Better is the aubergine parmigiana, that is firm and meaty. I’d say this is the nicest rendition of this dish I’ve had had it not caught in parts and taken on burnt notes. 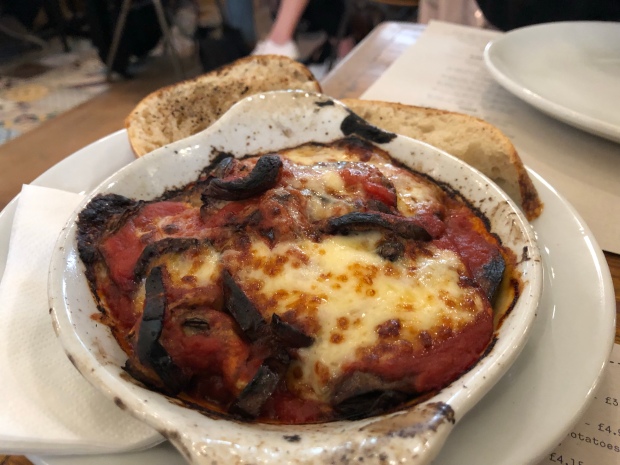 Well then the generator overheated, granite spewed on to Bennett’s Hill, and they had a full on meltdown. It became quickly clear that some parts of the dining room were making full use of that oven which blasts pizzas in about a minute, turning tables quickly. We were not in that part of the room. It took one hour to get our pizza and that was only after raising it with a manager. They turn up, one five minutes before the other, the two looking visibly like they’d been given five minutes difference in cooking time. The pizza is okay: it’s clearly not a true sourdough base, one seems a little underdone, the other is heavily scorched. The toppings are unevenly distributed, a minor detail, but one that others seem to get right. I don’t enjoy the No.7, which surprises me, because almost all of the ingredients appeared successfully over the two starters. The one with chorizo is better, but only because that cured meat is superb in quality. Claire notes that the pizza she had for lunch the day before was way better, a worrying thought for inconsistencies across sticking some dough in an oven. 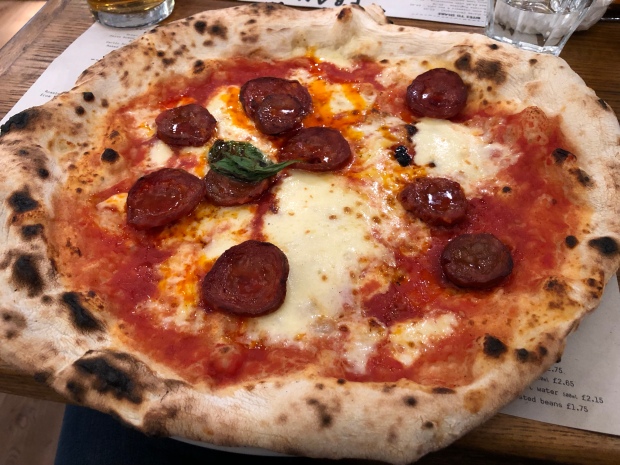 Now we know they’ve had a bad day, and so do they. The manager reappears, apologises and wipes the bill. He also does the same for the table next to us who’ve had a similar experience. He asks that we come back and give them another go, a fair request given how well it is handled, and one that we will do when they’ve settled in over to months to come. The previous night we went to another pizza place that opened on the same day here. The difference was huge; they were operating like clockwork and turning out some of the best pizza we’ve had in Birmingham. Part of me thinks that Franco Manca believe they can walk into a central spot and live off their reputation. They can’t. For now it appears that they’ve cut off too large a slice to swallow.

Thankfully the wait times for the A2B that took us there and back were much shorter.