Meat. If that one word isn’t to your liking, then you may want to shut down this window and go back to your hummus and crudites. For the rest of you, prepare for sympathy sweats and burger envy, for lumps of protein and token pieces of carbohydrates. The latest addition to this cities fast expanding food scene is an ode to fire and beast, to feeding using only the finest animals in the most skilled of hands.

Being a collaboration from Original Patty Men and Digbeth Dining Club it was never going to be ambiguous in name. They settle for Sear and Smoke, which makes sense given that pretty much covers off the cooking processes involved. It’s home is Crane, a beautiful old factory too close to St Andrews to be desirable. The huge ceilings, bare brick and steel framework feels like its already integral to the city and I feel slightly at loss to have seen this for the first time in my mid thirties.

I head straight to Flying Cows because a burger for breakfast makes perfect sense. There I take The High Flyer because that’s the award winner and award winners should only ever eat award winners if you want to go Full Pillock. I do. The aged beef is pink throughout, with the sweetest of bacon and Swiss cheese that has the same gummy feel as it’s American counterpart, only with the added bonus of actually tasting of cheese. Whisper it, but Flying Cows remind me of Bleecker Burger at their finest. It’s the burger I would choose from anywhere right now if given the choice. I wash it down with a cocktail from the Birmingham Whisky Club. And lovely it is, too. Far better than the whisky I usually wash my breakfast down with.

There are a dozen or so food traders here on the day, the cream of the local talent and some from further afield. From a little place called London we have Wingman, a chicken wing specialist who came to my attention when they won best of the best at this year’s British Street Food finals. I have the winning dish (see previous Full Pillock comment) that has the sweet, sour and hot profiles of Thai cooking all over their chicken and all down my jacket. Properly lovely stuff and easily the best chicken wing I have ever eaten. Taking second place at those awards was Baked in Brick, today cooking a 45 day aged rump cap as a special alongside some of the more usual suspects. The beef is gloriously tender, with a chestnut mushroom sauce enriched with bone marrow that transformed some very ordinary fries underneath into something far more magical. 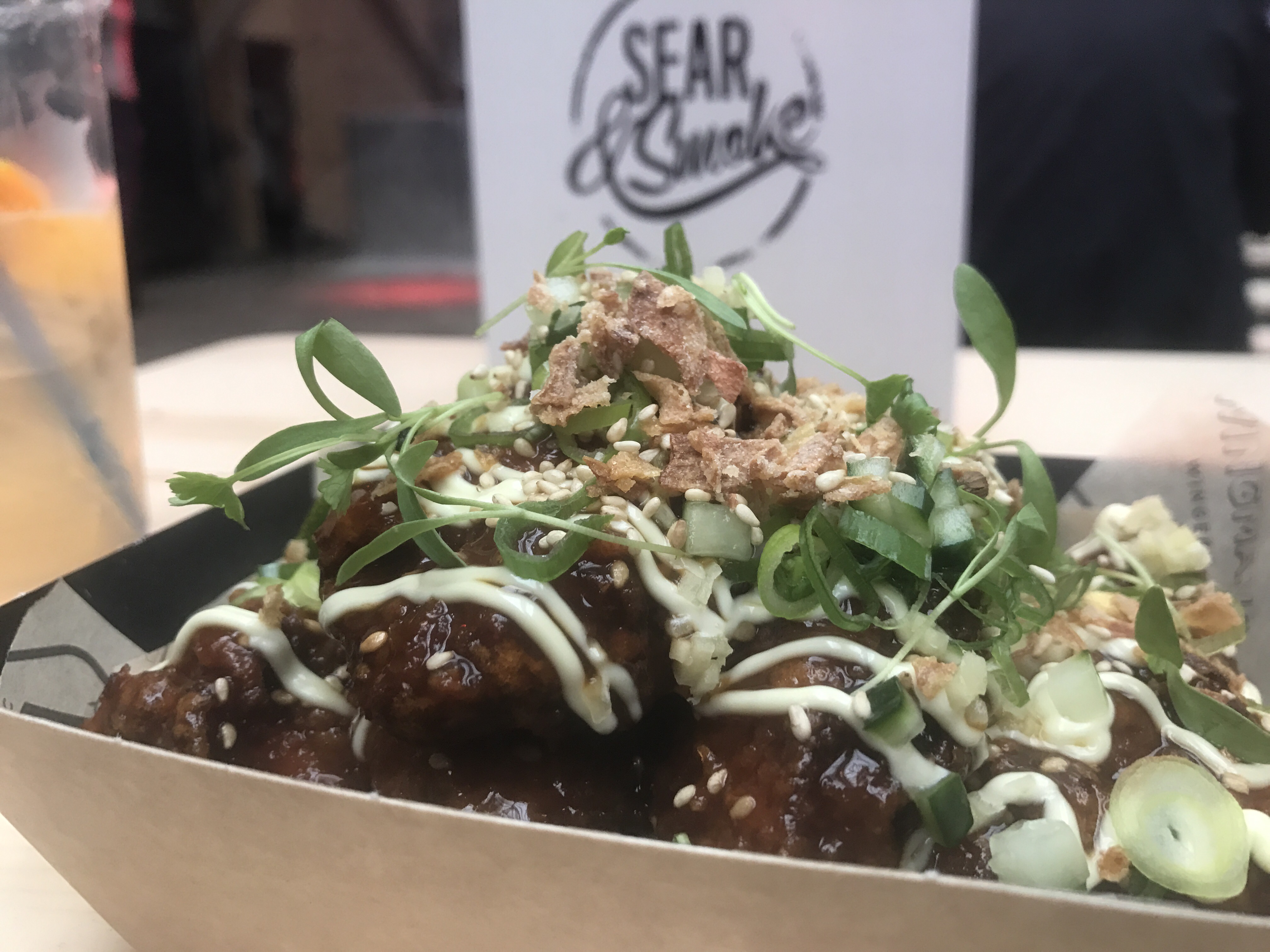 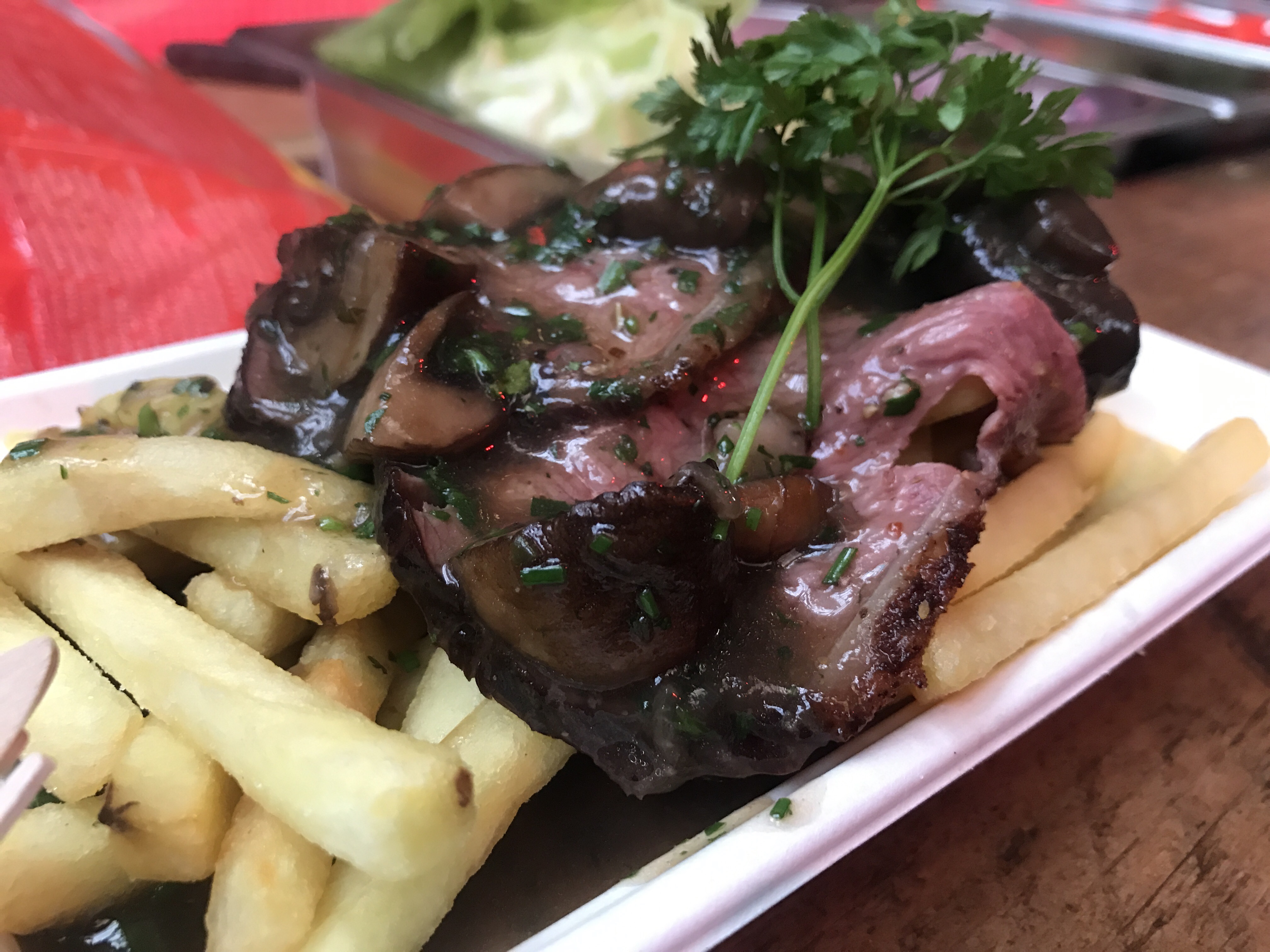 I’m outside for a talk by a man who knows a lot about street food and more whisky. The air is stained by smoke and the smell of rendered fat. Low’n’Slow are to blame. Throngs of people have gathered round to watch him smoke pork belly over a make shift pit on the floor before being finished over a barbecue by the very farmer who supplies the pigs. The meat is stunning; aged pork with thick ribbons of fat that only a fool would discard. It’s a proper plate of food, with potatoes cooked with bone marrow and a fiery burnt salsa and sharp ‘slaw. He is bringing the theatre of Meatopia to a warehouse in the backstreets of Birmingham. This is the future of Sear and Smoke.

Original Patty Men are here with a friend – Dom Clarke of Canneat, a little place in Stirchley that I have much love for. I try the special which has their usual patty with ox cheek, gruyere, and ‘French soup’ onions. It’s one of the days more technically minded dishes, aimed squarely at a mouthful of umami. The ox cheek has been braised in reduced Guiness, the onions cooked down to a meaty gelatinous mess. It’s seriously good, I just wish I’d left more room for it. 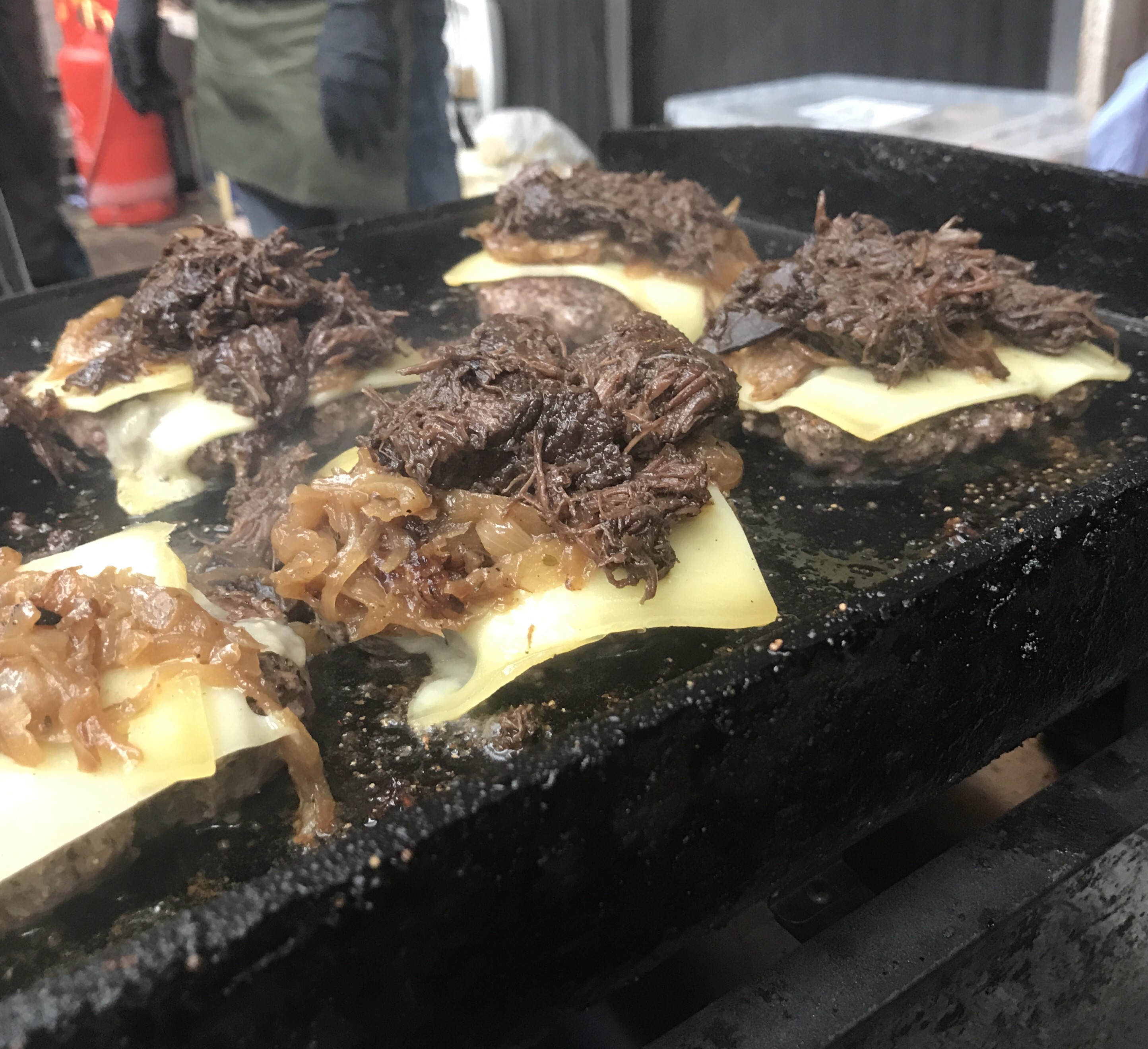 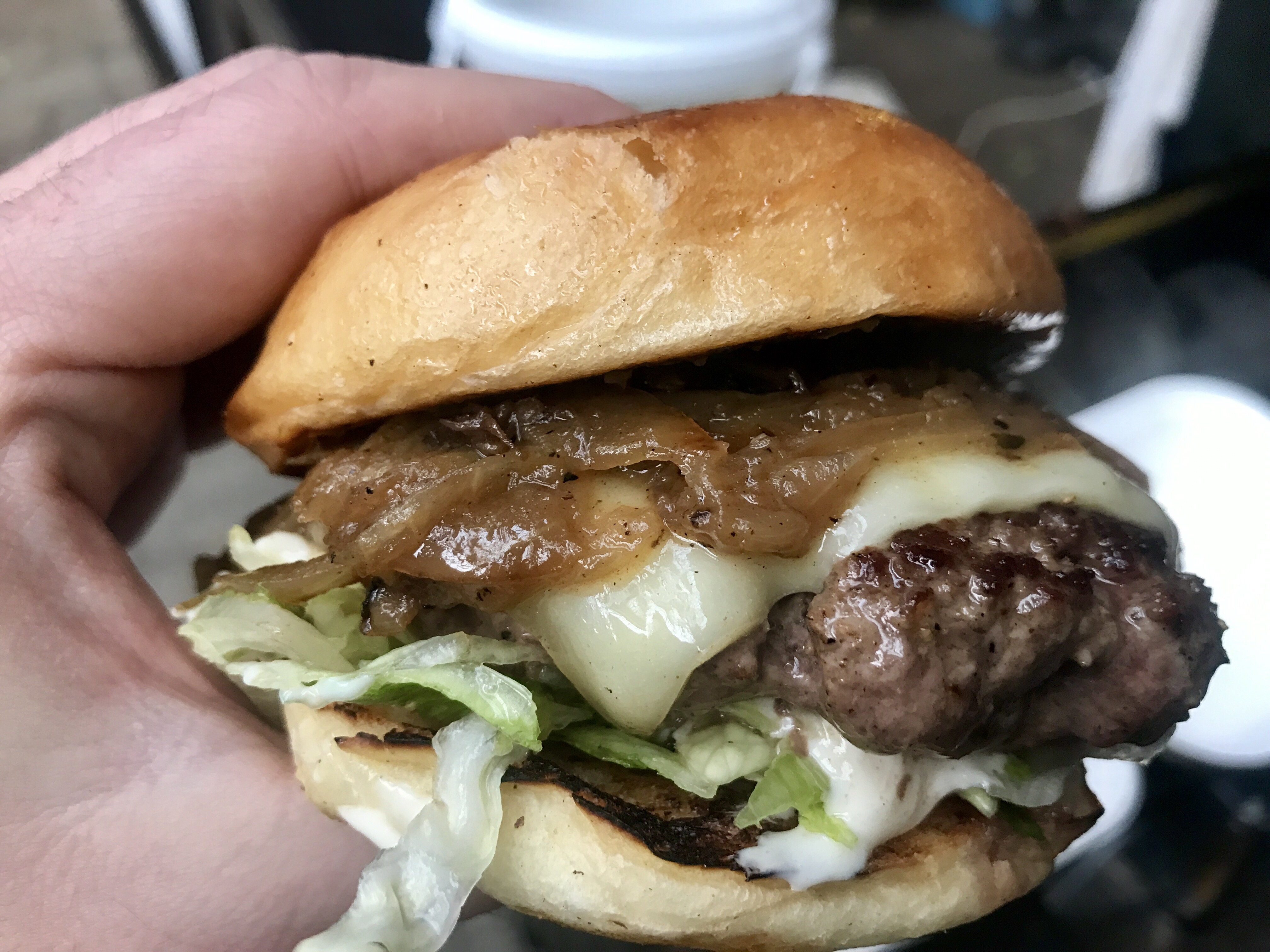 I wanted to try more, though without my usual partner in crime I was defeated. Three hours after the start and the place was starting to heave, my attempts over, dictated by a bulging waistline and the arrival of a coven of my ex’s friends. I depart for a well earned snooze, awaking to a social media frenzy at the event as the night draws in and the bands begin to play. It seems that I was not alone in my love for it. It was a bona fide success, proof that Birmingham can play with the big boys. It was a faultless stepping stone to a more ambitious event next year. The countdown to the next Sear and Smoke has already begun.

I became interested in the concept of Temper long before it opened its doors in December, back when Neil Rankin announced his plans and an entire community of non-meat eaters decided the concept of cooking bits of animal in the middle of a restaurant was a bit too much for their heads to handle. Whilst they were in endanger of spontaneously combusting, I was busy working up a sweat of my own. You see, burning bits of animal is my thing; I understand if it’s not yours, but given the choice I’m always to take a slow cooked bit of cow over a carrot. And if I can watch the magic happen whilst eating said bits of meat then I’m all yours. Take me. Do as you will.

The first thing that hits you when you descend down the stairs is the smell.  It is one of victory of the food chain in the correct order.  Of smoke and of animal. It wears you more than you wear it.  I take one of the stools around the central counter and watch the team at work.  Various bits of cow, pig, sheep, and goat, each sold in mixed cuts of 100g portions.  There are taco’s, larbs and kofta.  Sides, sauces, and sprinkles.  Aged cheeseburgers are the first to arrive; mini patties of aged beef, rare in the centre and charred on the outer, sat on freshly pressed taco’s the right side of sandy in texture.  It is the perfect two bite snack; meaty, complex and undeniably masculine.

And then the meat.  Oh Lordy, the meat.  One plate of pork, another of lamb, piled on to flat breads so that the rendered fat has a final resting place.  Each has various cuts, distinguishable only by the amount of fat between meat and skin.  I remark to the chef working by me that the clarity of flavour each cut of meat is extraordinary – “just salt, pepper, and a little fire” is his response.  If only cooking was that simple.  The process works; leaner cuts come pinker than working muscles.  Fat opaque.  Skin crisp.  Some bits require your own teeth, others don’t.  All of it is incredible.  Asking me which one is my favourite would be like asking my Dad to choose between his two sons.  I reckon a decision could be made at a push, but it’s not for my ears.  With this I order a burnt pepper salsa that adds a nice piquancy to both meats and a crumb of pork scratchings, hot pepper and pickled onion that seasons the pork to a new level, as well as providing an additional texture to a bowl of burrata, jalapeno and lime. The latter is an inspired choice of side and one that I reach for in-between mouthfuls of meat to cool and sharpen the palate. 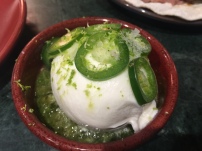 They do desserts; a soft baked cookie and a caramel drenched pastry.  Both sound like they could genuinely change my world, though by now I am sweating unattractively and unable to finish the slices of goat kindly offered by the same chef who shared his insight.  I sit for a while and take it all in; the place is heaving at lunchtime just weeks after opening and rightly so – these people are here for meat and theatre and both are delivered in abundance.  The smell of fire and animal would stain my jacket for the rest of the day.  I wear it like a badge of honour.