I’m not sure what I expected of Sticky Walnut, but I’m pretty sure it wasn’t what we got.  I don’t want to it to sound like I wasn’t happy; on the contrary; the small team here delivered an almost flawless meal from start to finish.  It’s just that the place’s reputation conjures something more exuberant and flashier than the reality of a small bistro in a suburb of Chester.  The décor is basic; bare tables and chairs, a blackboard, and a bookshelf adorned with some serious cookbooks.  Staff wear jeans and aprons, looking and acting like they enjoy being there.  It’s all a bit of a revelation to how dining can be with the stuffiness completely removed.  As much as I enjoy donning a suit and tie to have dinner at Le Gavroche, I’m enjoying being here on the basis that they don’t care who I am provided I am not being a twat.

Maybe the root of the adulation is the menu that reads like a prose.  It is skilled at speaking to the customer in a language we understand, with a basic desire to feed, and to feed with a collection of ingredients that sound like they should be together. After deciding that one of everything is not an option, we order bread and olives and cocktails and wine, before taking some more time to peruse.  The focaccia is gorgeous stuff; light and packed with the flavour of olive oil. 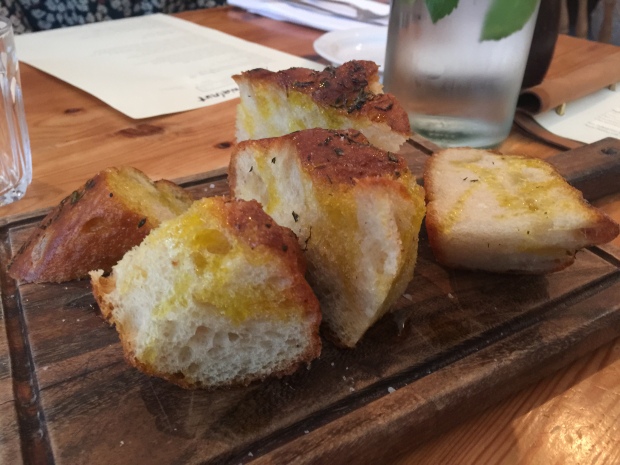 We get started properly and instantly I am in love.  Mozzarella is blasted with direct heat and nestled on lightest of romesco sauces packing the biggest of flavours.  Across the top is a charred calcot, a slightly milder spring onion, that adds a warmth and sweetness.  It is impeccably balanced.  A chicken liver pate is all technique, the offal seemingly sieved and sieved and then sieved again until it’s smoother than the tones of Barry White.  Pickled rhubarb the perfect foil to cut through the richness.

In all of the time I have been eyeing up here the Jacobs ladder has never left the menu, so it makes sense that we should now try it.  The beef short rib has been long braised until it is just holding it’s shape, sat on polenta so creamy it could have been mistaken for Joel Robouchon’s pomme puree.  Honestly, I’m not mad on the anti-presentation that see’s the meat mostly covered by shallot petals braised in red wine and crispy bits of fried kale, but that is about as much as I say as negative comment.  It’s seasoned to an inch of its life.  It’s cohesive.  It’s absolutely fucking brilliant. 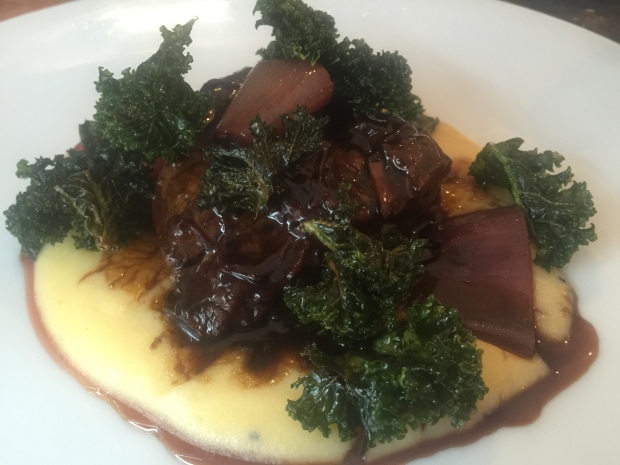 Do I need to tell you that another main of merguez cassoulet was of equal standard?  Probably not, but I will anyway.  It’s a dish that owes the flavour to time and patience, with the ham hock and lamb sausage unified by a robust tomato sauce.  There are wedges of carrot and butter beans to remind that the fun is elsewhere on the plate.  A puddle of vivid green parsley oil is the clever addition.  It’s a splash of light amongst the dark and heady flavours it rests beneath.  Fat chips with parmesan and truffle oil are prime examples of the best use for a potato. 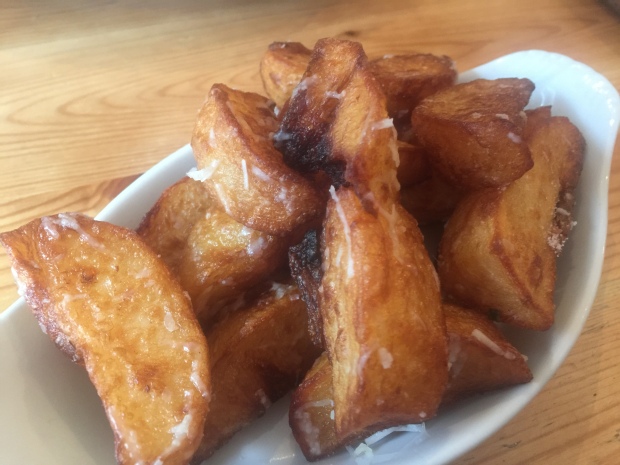 We do desserts because we know what is good for us.  Rhubarb reappears poached and as a compote, with shards of green tea meringue, blobs of lemon curd, and a yogurt sorbet, all for additional freshness.  It’s light and harmonious, a refreshing way to end a meal.  On the other end of the scale is a sticky toffee pudding, lighter than it looks but no less naughty.  We finish with a pre-ordered birthday cake, a bargain at £25.00 given that it could comfortably feed ten.  We take the thinnest slices possible and box the rest.  The cake is mostly chocolate mousse, garnished with a little honey comb and some honeycomb ice cream.  The remainder would serve us well for the rest of the weekend. 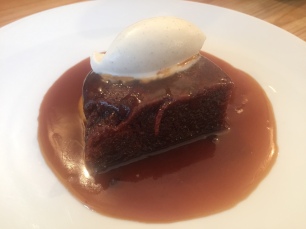 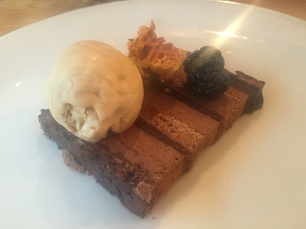 As if anymore reason was needed to go, the wine list is almost entirely under £40 per bottle and prices dip down at lunch to a totally irrational £16 for two courses.  We overdo it on everything over two hours and struggle to hit forty quid each, including that birthday cake. It’s fantastic to see the group expanding – an additional two already, with a fourth lined up for Liverpool.  The truth is they deserve to be everywhere.  Accessible and affordable; ingredient led cooking with precision.  Sticky Walnut is as good as a bistro gets.