I started the week convinced I had COVID, which is regrettable in every way apart from the symptom of lack of taste and smell, which I was intrigued to experience so that I can know what it’s like to be other food bloggers. It turns out I don’t, which is a result given that it was my birthday weekend and tracking would have been a nightmare. Last week we did the Rishi thing, then the pre-birthday drinks in the cocktail bar, then the other cocktail bar, then the hotel cocktail bar because everywhere else is closed. Then the birthday trip away, then back for the birthday dinner with my mate, before the inevitable trip to a couple of pubs. Sunday went back to the pub, and the cocktail bar, and then the different pub. Then Monday night it’s like, okay, this doesn’t feel right at all. If anything it’s made me realise that I should slow down at the moment. Less groups of people over less locations and time from now on for me. 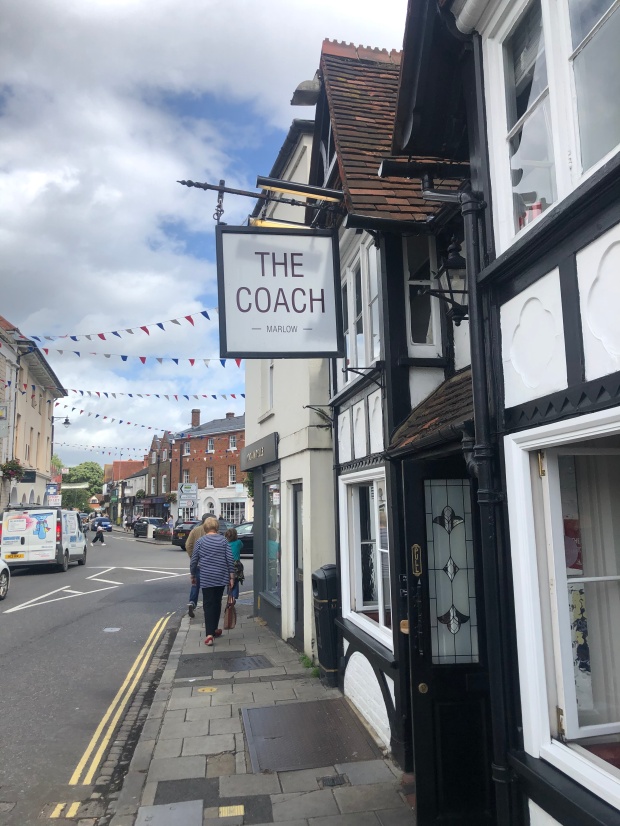 The trip away started with lunch at The Coach. Marlow is a pretty place with pretty ex-London faces spending pretty sums of money on pretty much anything. There are houses that sit on the banks of the Thames with boats just for the hell of it, and butchers which promote their wines of the week for the paltry amount of £40 a bottle. It is a mix of old Buckinghamshire money and new London money with the common denominator of money. Tom Kerridge has a two star pub here which I’ve been to before, and a one star pub which I’m about to write about. To call either the Hand & Flowers or The Coach a pub is a statement I’m not going to back-up with substance here.

It’s a nice spot. Cosy and well appointed, the palate of Victorian green and white so de rigueur, to join the small plates menu that is a very easy way of scaling up a bill quickly. Knowing that we have dinner in a few hours time we keep the order small, and it proves to be a wise choice.

I can’t pretend to love everything we eat. A venison chilli is a wholesome bit of cooking, but is a bit gritty and over seasoned, whilst the caramelised onion and Ogleshield cheese scotch egg is technically sound but the Parmesan veloute it sits in is underwhelming stuff. If it sounds like I’m giving it a hard time, I’m not, but this is a pub with one Michelin star that is presently ranked no.5 on the Top 50 Gastropub list. 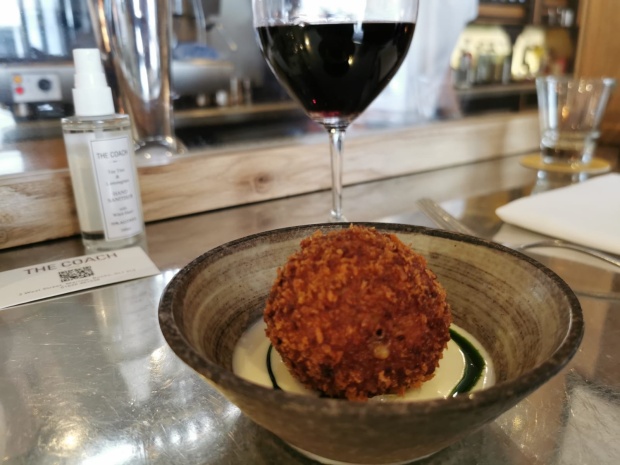 When it’s good, it is so very good. The strongest dish of the day is chicken from the rotisserie. Brined and cooked until it’s borderline done, it comes swathed in opaque sheets of lardo and crisps of Jerusalem artichokes. Hidden underneath the lardo is a scattering of seeds and finely chopped herbs, whilst at the base of the dish are a dice of the Jerusalem artichoke bound in, I think, a purée of the same veg. It’s cohesive and rich, the poultry an ideal companion to the earthy, buttery tones of the veg. A chicken Kiev relies on the same meat and one veg (not me, stupid) tactic, using courgette this time as the foil. A courgette purée spun with basil is the highlight of a very nice plate of food. 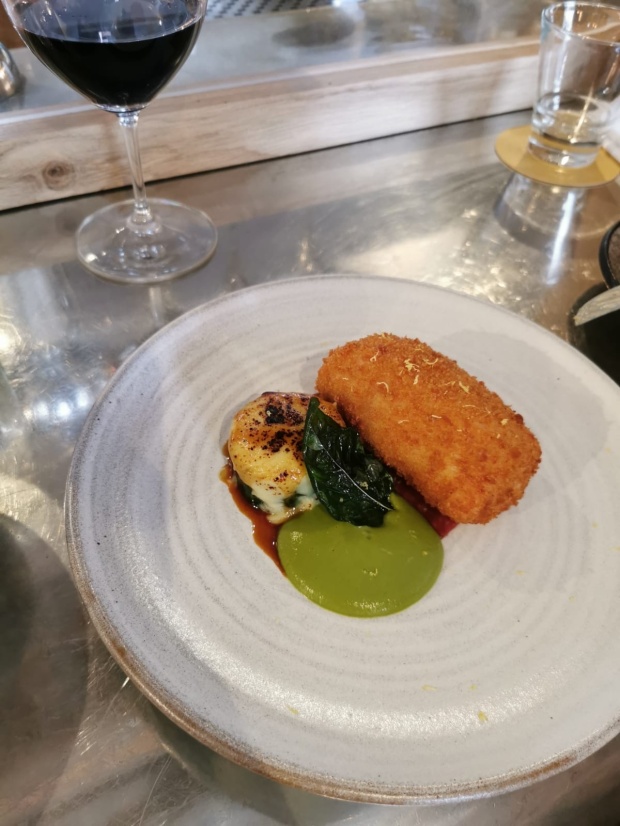 A word on the chips. I’ve said for years that I consider the chips at Hand and Flowers to be the best chips I’ve ever eaten. These are better; chunkier, with a different cut that benefits the triple-cooked process and gives more potato. You might sniff when I tell you they are £7.50 for a portion including bearnaise sauce, but we’re paying and you’re not. And I’d pay it a lot more frequently if I was local.

Dishes are mostly over a tenner and all under £20, and whilst we escape with a bill under a ton, slightly bigger appetites should allow a bit more including wine. Overall I enjoyed it; the standard is similar to that of Kerridge’s other pub, and the menu is appealing. The best dishes are very good indeed. And those chips. You have to try those chips.