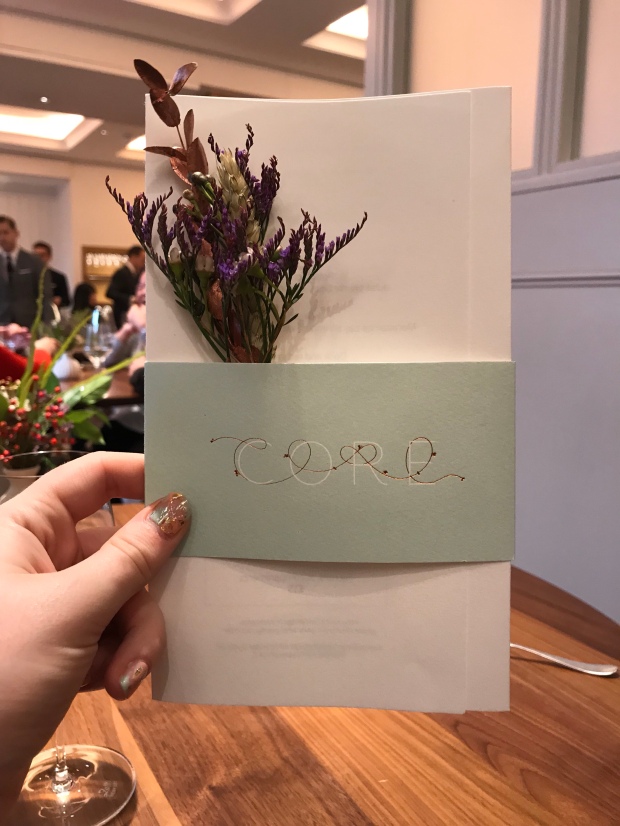 I don’t think you ever fully get over losing a parent. Almost four years on, with the pain all but diminished and just the good times lingering on in the heart, I am still reminded of Mom in the smallest of gestures. A few weeks back it was in the bathroom of a flat she has never visited, me bent over the sink, taking that beard of mine down from unkempt to preened. I cleaned out the sink to the best of my manly capabilities; a few hairs remained dotted around the peripherals. I laughed internally. These dozen or so specks of my face will probably go unnoticed by Claire, but to my Mom they would have been the catalyst for war. In her world you left the bathroom as you found it or you risked her wrath. And we never risked her wrath; we were too wise to that. More recently we were sat in Core by Clare Smyth when it happened again; a carrot cooked in lamb fat and topped with straggly bits of the meat, sat in a puddle of heavily reduced cooking liquor. Once again I was a child; six, maybe seven years old, dunking thick slices of Warburtons bread into Mom’s lamb stew whilst watching Teenage Mutant Ninja Turtles on telly. A happy place. My mother was generally an awful cook: everything was left on the heat for far too long, which is what made her stews so special. The cheap cuts would be braised down over endless hours so that the fat became wobbly nuggets of flavour and the sinew broke down to nothing. Vegetables would be cut too chunkily so that the edges crumbled and the insides a soggy mess, whilst the sauce had globules of meat fat dotted around the surface and was thick enough to paint a wall with. Everything tasted of lamb. I adored it and this starter in a two star restaurant in West London served as a reminder of why I did. It conjured up memories of the smell wafting through the house whilst Mom and I played cards on the living floor. Of how regardless of how swanky the location the most important ingredients are love and the desire to feed. I could have cried, had I not been very conscious that every member of the floor team had an eye on every movement of every table at all times. Nobody likes a crying diner. They ruin the appetite.

We’d been looking forward to this lunch for some time. I’d eaten the food of Clare Smyth before, a few years back when she was chef patron of Ramsay’s three star gaff on Royal Hospital Road. At that point in my life it was the highlight of my culinary experiences, the first time that food and service of the highest quality alligned. I met her briefly afterwards and thanked her. It is another great memory. Fast forward to a freezing cold November afternoon and we had fought through the tourists of Portobello Road to the smart white-fronted building that bears her name. The inside is deliberatly unfussy. No tableclothes, books elevating lights, neutral coloured walls and tasteful art. The touch of a women is obvious. Nothing is harsh; it is soft and appealing. Claire is obsessed by the dried flowers that are tucked neatly in to the menu and spends ten minutes taking pictures whilst I peruse the menus. £65 for three courses is a bargain, less so the wine list. We take a Beaujolais at £90 that you can pick up for about £30.

Tables are quickly rearranged for the opening play, a spread of small bites on an array of custom made surfaces. A tartlet of eel with dashi jelly, nori, and vinegar is exceptionally well balanced, as are cheese and onion gougeres made with the lightest of choux. Crispy duck wings arrive under a cloche of orange smoke and are quickly devoured. Best is the foie gras tartlet with madeira jelly that is silky smooth and massive in flavour. A wholegrain sourdough follows with butter from Normandy. I’ve become a little obsessed with sourdough of late: this is up there with the very best. 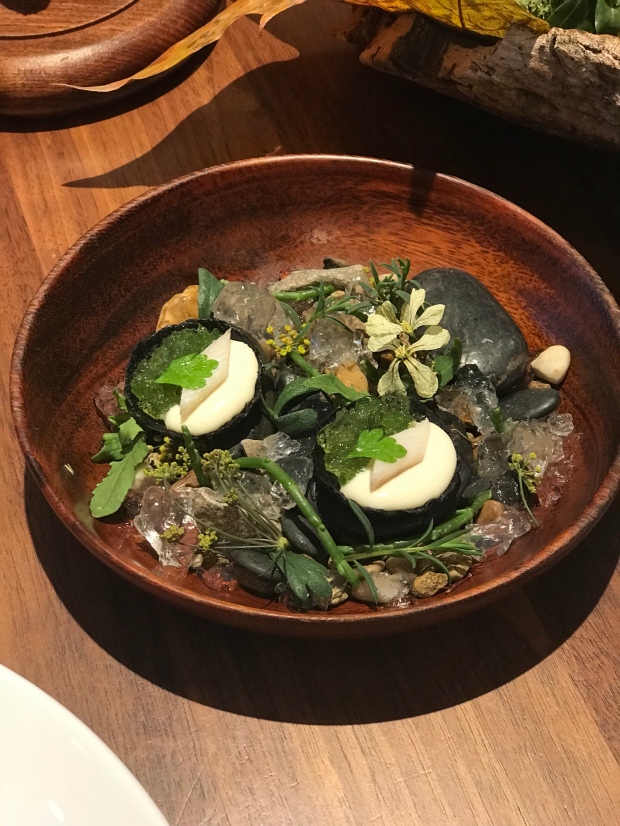 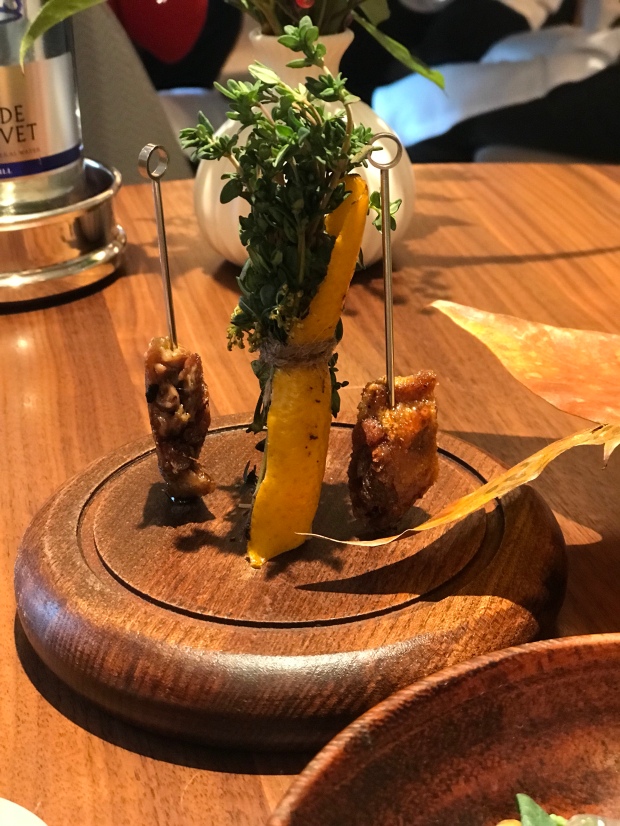 I had that carrot and lamb dish as a starter, the memories flooding back as the rich ovine flavour surrounded everything, with only a dollop of sheep milk yogurt and carrot top pesto for respite. On the side was a little bun made with lamb fat that had more confit meat in the centre. It was designed to mop up the sauce, which we do with great pleasure. Claire had a dish she had long been eyeing up on social media: A pan fried sweetbread with a gently cooked langoustine, pickled carrot and the hint of anise from fennel seeds. To this was poured two sauces that met concisely in the centre; a vin juane and the lightest of lobster bisques. Proper three star cooking that balances the rich and the acidic with ballerina-like poise. It was the sum of equals, where nothing outdoes its counterparts. Harmonious perfection.

There has been much talk of Core’s emphasis on vegetables, though to me the most obvious skill was the continuation of flavour. Just like the lamb carrot dish, my main may have listed Roscoff Onion as the main ingredient but the dominant flavour is that of beef. The onion is beautifully decorated with flowers and stuffed with oxtail that melts in the mouth, with a rectangle of short rib braised for two days. A cylinder of confit potato topped with bone marrow tastes like it has been basted in animal fat, though that could just be the sauce that joins the dots and speaks of multiple days labour. If anything the duck main served opposite is even better, with a breast that has crisp rendered skin and meat the colour of Provençal rosè. To the side is a tart of braised duck leg and grapes. Magnificent. Clever additions of Timut pepper and a gel of honey and thyme add light floral notes. But that sauce! Oh my, that sauce. The greatest I can remember, made with duck juices, Madeira, and probably much more. I lean over to swipe some with my bread; a pot arrives of my own to save me the bother and Claire her lunch. Three star service. 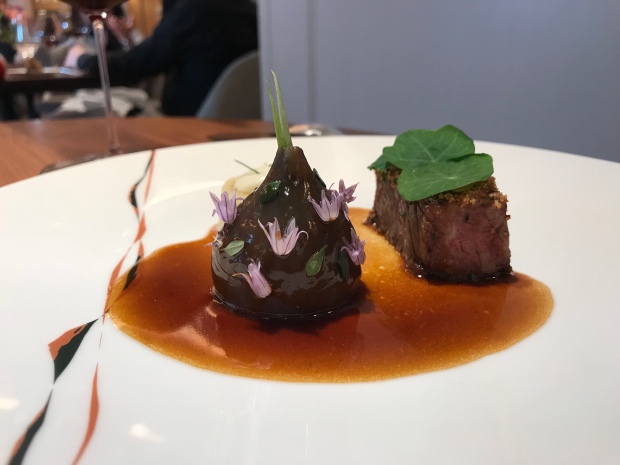 Pre-dessert is an apple in appearance and unadulterated flavour. A caramelised apple mousse contains a centre of diced apples in brandy, which combined riffs on the flavours of toffee apple. It’s about as simple as the meal gets. Of the two desserts I am less fussed with the carrot cake that mimics the appearance of the starter, and more taken with their take on the malteaser. It’s a crash of malt, chocolate, and hazelnut on a plate of elaborate feathers. For the first time I finish a course faster than my other half. It is that good. 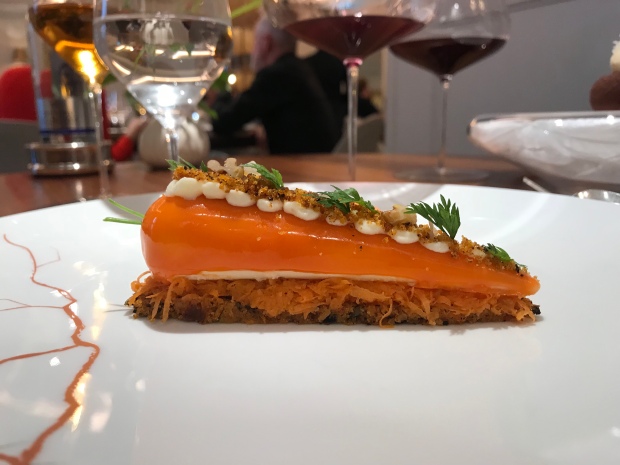 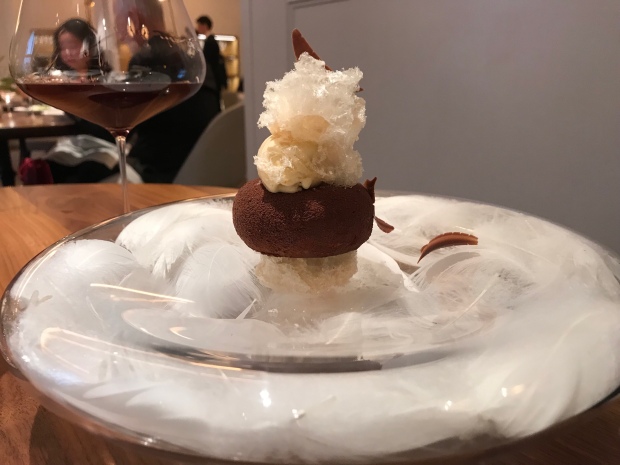 Petit fours of molten chocolate tart and jellies of sweet wine traditionally conclude the meal before a tiny birthday cake arrives. It’s the little touches that count. Lunch clocks in just shy of £300 and for once I don’t bat an eyelid. It feels value given the level of food and service received. It’s one of the best meals we’ve had, where the flavours are massive, the presentation beautiful, the service slick. It evokes memory of the past whilst pushing boundaries. In the year since Core opened they’ve attained a perfect ten in the Good Food Guide and two Michelin stars, whilst Clare herself has been awarded the world’s best female chef. It seems only a matter of time before Core emulates the previous home of its chef and is awarded the ultimate recognition. Make no doubt about it, this is a true three star restaurant in every sense.